By now, perhaps you are familiar with the saga of Jerry Foxhoven, the 66-year-old former director of Iowa’s Department of Human Services who was asked to resign by the governor last month, days after emailing all 4,300 of the department’s employees to inform them that Tupac’s birthday was coming up and encouraging them to celebrate it by listening to one of his songs. It’s clear now that Foxhoven’s ouster was not related to this or any other of the many Tupac-related communications he made with staffers during his two-year tenure as director, or to his love of the late rap legend more generally. The governor’s office has explicitly denied it, and a new Des Moines Register report pretty definitively establishes that the decision to let him go was made before his final Tupac missive. His departure probably had more to do with Iowa’s troubled Medicaid program.

So Foxhoven was just another government man, at the head of a department with a whole host of extremely serious problems, who happened to worship at the altar of Makaveli. His ‘Pac fixation is not the most important part of his legacy, or even particularly relevant from a strictly public-interest perspective, but it’s still pretty funny. Which is why we’re bringing you the highlights from a recent SPIN public records request for all of the Tupac emails that Foxhoven sent or released while working as director. These are the same documents on which the original Associated Press story about Foxhoven was based, but for whatever reason, the AP left out a few solid comedic details, such as the message he sent, just three months after starting the job, about flying flags at half-staff to commemorate Tupac’s death anniversary. You can read it in the screenshot below. 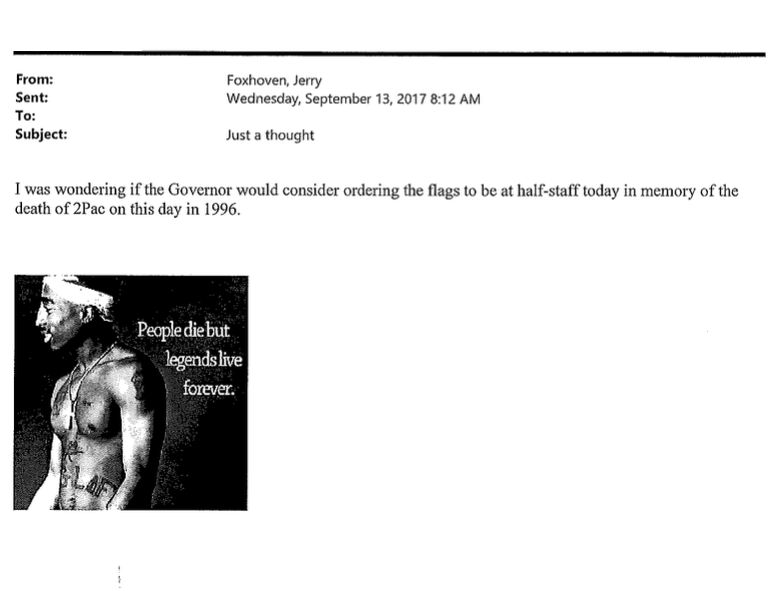 It seems likely that this inquiry was, at least on some level, a joke: he didn’t send it to anyone at the governor’s office, but to his public information officer and policy advisor at DHS. (One responded with a Tupac quote, and the other with an image of a tattoo of the rapper as a unicorn, claiming—facetiously, we can safely assume—that she’d just had it inked on her own body.)

One year and a handful of Tupac emails later, Foxhoven was feeling more somber in his marking of Tupac’s death. His policy advisor emailed him about making a visit to Marshalltown, an area that had recently suffered severe tornado damage. The policy advisor had been in contact with Jeff Edler, a state senator who represents the area, and wanted to know Foxhoven’s thoughts about Edler’s suggestions for the visit. Here’s how Foxhoven responded:

Foxhoven’s fandom—which, as detailed in the AP story, also included a tradition of “Tupac Fridays” in his office and a plate of Tupac cookies on his birthday—was apparently pronounced enough to become a piece of office gossip. In one email which was eventually forwarded to Foxhoven, a DHS employee is frazzled after her superior “blindsided” her with questions about Foxhaven’s presence and behavior in a recent meeting, whether he’d “made any more references to 2Pac.” 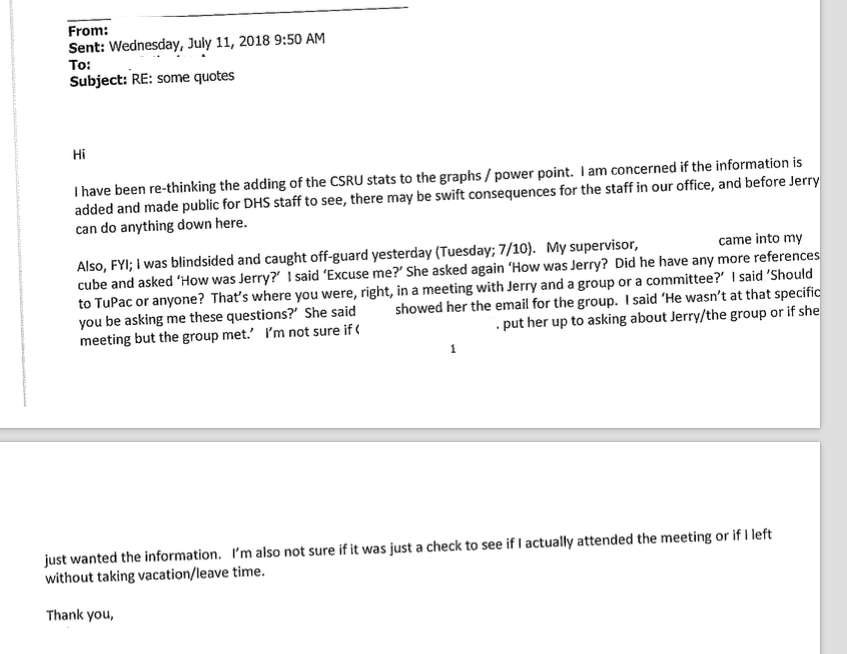 Foxhoven sent a few all-agency emails with inspirational Tupac quotes over the course of his tenure. Most of the responses he got were positive: “This is AWESOME!!,” “Long live TuPac!,” “You are as cool as a summer breeze,” “I didn’t know you were Tupac cool,” and so on. But evidently some people didn’t like them. One email to the director, apparently meant to encourage him in the face of some struggles with staff morale, reads in part, “I really believe if given the chance, the overall culture of this agency CAN change (99.99% of the people are NOT like the 1 who sent your Tupac email to the legislators!).” Another reads, “I love your 2Pac messages… and the fact that you still send them (despite the haters) makes me appreciate them even more.”

Once, an employee tried to correct him on his usage of “2Pac” instead of “Tupac,” and he politely schooled them:

Another time, a different employee wanted to know whether Foxhoven actually liked Tupac, or whether he was just fond of putting his quotes in emails. Foxhoven was unambiguous in his response. 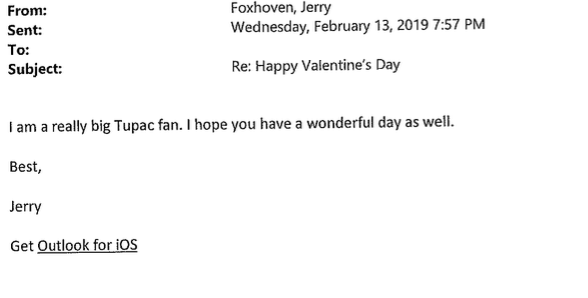 Whatever else you might say about Jerry Foxhoven, that much seems inarguable: he is a really big Tupac fan, and he hopes you have a wonderful day.