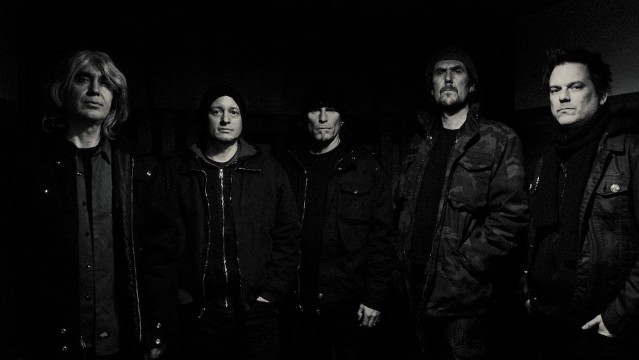 CREDIT:Adam Tucker/ Courtesy of The Artist

Tau Cross are a metal/punk band with members from three different countries; they include former members of veteran bands like Amebix and Voivod. The band was planning to release a new album called Messengers Of Deception on the extreme-music label Relapse this summer. (We at Stereogum have posted Tau Cross’ music, most recently the Messengers Of Deception single “Burn With Me.”) But today brings the news that the album’s release has been cancelled. Relapse has severed its relationship with Tau Cross for a surprising reason: On the new album’s liner notes, the band thanks Gerard Menuhin, a prominent Holocaust denier.

Apparently, the Messengers Of Deception liner notes prominently thank Menuhin, claiming him as a particular inspiration for frontman Rob Miller. (Miller, an Englishman, spent years as the singer for the anarcho-punk band Amebix.) Menuhin, a Scottish-born writer, is the author of the 2015 book Tell The Truth And Shame The Devil, which calls the Holocaust “the biggest lie in history.”

Over the weekend, the German magazine Ox brought it to our attention that a person named Gerard Menuhin was prominently thanked in the new Tau Cross album, and specifically credited in the liner notes for inspiring Rob Miller. All Relapse records go through a vigorous proofing process–checking for spelling and punctuation mistakes, mostly. We all read this name, but didn’t recognize it or think that it was anything other than a personal friend of the band’s, that we did not know. Ox however recognized the name as a far right conspiracy theorist, focused specifically on Holocaust denial. Suddenly the lyrics and themes of the new record were cast in a new light, for me. I spoke with Rob Miller, who is the individual in the band who Ox was interviewing, and while he denied being a Holocaust denier, I cannot comfortably work on or sell a record that dabbles in ideologies such as these. There are certain issues that rise above mere political differences and this is one of them. I spoke with the rest of the band on Monday, and NONE of them had any idea who Gerard Menuhin was, and were as shocked by these references in the record, as we at the label were. I firmly believe that these references and mentions in the record do not represent the band as a whole. but rather just Rob Miller’s. In light of all this, Relapse swiftly decided we cannot move forward with this album–we gave the masters back to the band, together with the rest of their catalog.

Yesterday, before Relapse came forward with that statement, the band posted on Facebook about splitting with Relapse without explaining why:

We regret to say that Tau Cross and Relapse records are now parting company after several successful and fruitful years together. Circumstances have arisen that must put an end to our relationship. We would like to extend our gratitude and thanks to all the staff and crew at Relapse for their work over these past few years and our apologies to supporters who have already bought the new record.

We shall be looking into other avenues to release the album ‘Messengers of deception’ and will keep people updated about that development.

Tau Cross have not yet responded to Relapse’s statement.