This article originally appeared in the August 1985 issue of SPIN.

The street is filled with broken Malta bottles. The building’s doorway is decorated with a cross drawn with what appears to be cat shit. Somewhere nearby a tire is burning.

Three long flights of stairs above this, Thurston Moore, the master of all he surveys, lies sprawled across a daybed. Looking like a sallow and distended version of Jay “The Menace” North, Moore lolls his head over the edge of the mattress and touches the apartment wall with his feet. A few inches away from these monstrous appendages there’s a poster calling for the swift release of Charles Manson.

Thurston plays guitar and sings with New York’s Sonic Youth. Although he denies it, he’s also Sonic Youth’s leader. He shares the apartment with his wife, Kim Gordon, who is Sonic Youth’s bass player. They have a dog named Tex, a cat named Squeaky, and one of the most brutally powerful bands in the free world.

Through four years of steady-if-mercurial live performances and a half-dozen records released on European and American independent labels, Sonic Youth has evolved into a unit capable of generating a larger, more noisesome riff than anyone since the John Cale-era Velvets.

In an interview two years ago, Thurston stated that his intention in starting Sonic Youth was to combine the bone-splitting intensity of Throbbing Gristle (Britain’s seminal and monolithic un-punk squall masters) and the reckless energy of Black Flag (America’s dukes of the hard-noise arena). If Sonic Youth has missed this target, it’s only by inches.

Thurston’s and Kim’s string hammering, in concord with that of guitarist Lee Ranaldo, all laid over the cleaved-meat percussing of Bob Bert (recently replaced by former Crucifuck Steve Shelly), can whip up a din that sends neophytes scampering into corners whilst its devotees writhe to the snake-oiled Discordian mojo.

Alternately, the band’s instrumental elements can roll themselves out like a deep-pile steel-wool carpet above which the vocals float and dart as if they were orgone pixies sprung from the mane of Wilhelm Reich. Their most recent recording, Bad Moon Rising (released in this country by Long Island’s petite Homestead Records), is handily available evidence of Sonic Youth’s binary nature. 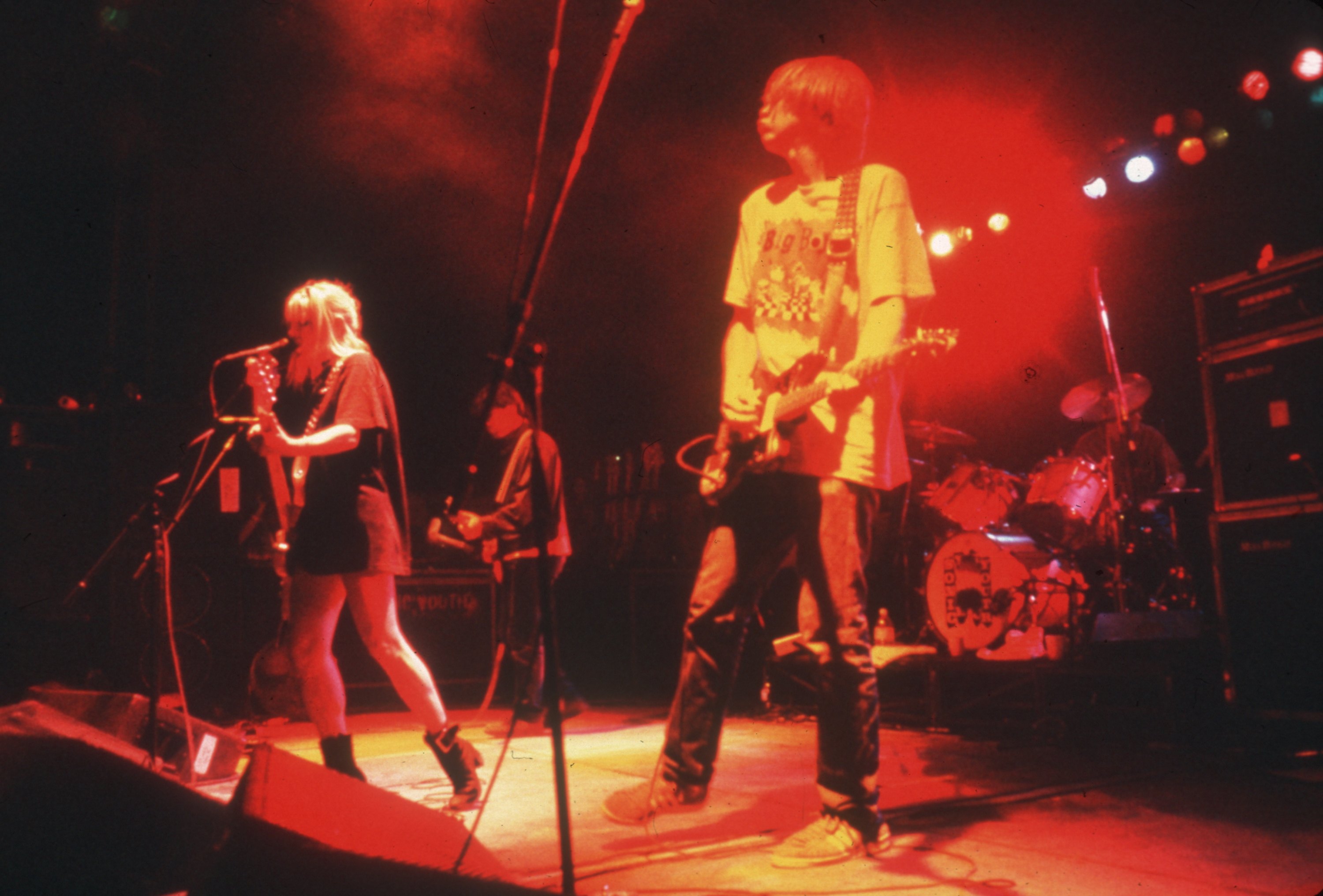 Recorded for something less than 4,000 borrowed dollars, Bad Moon Rising was named after the CCR hit (“John Fogerty is my life’s blood,” sayeth Moore) and offers an aural portrait of the band that is less singlemindedly violent than its immediate precursors. The ker-unch of guitars-as-battling-bulldozers is certainly the sound around which the record coils, but the strings’ scraping roar keeps away from the upper tonal registers. Consequently, the vocals assume a higher profile than they have in the past, and the vocalists treat their throats with more respect than they grant their instruments.

The pacing of the songs is also a bit less jarring here than on previous efforts. In fact, one of the tunes, “I Love Her All the Time,” has such a (comparatively) languid air that I’m tempted to describe it as pastoral. That description is relative, however, and the album’s primary lyrical outlook is about as pleasant and simple as an ax blow to the face.

And, as if to blot out any possible reading of the LP as a signpost pointing toward a cheery ‘n’ bright Sonic Youth to come, the album’s capstone, “Death Valley ’69,” is a creepy-crawl through Spahn Ranch with guest howls by the Love Kitten of the Hate Generation—Lydia Lunch.

In a lot of ways it seems that Sonic Youth is Hell-bent on defying listeners’ attempts to prophesy its stylistic direction. By waving my right hand before his face, I catch Thurston’s attention and ask him if this is the case.

“Well, actually, the direction of our material is more or less dictated by our instruments,” he forthrightly replies. “After we got back from Europe the last time, we decided we were tired of doing the old set, so we took all the strings off the guitars, threw them around a little bit, put some new strings on them, and hammered them a little so that we had to write all new songs. The tuning on the guitars once we got through with them was so different that we killed our old songs.”

“When we wrote a new batch of songs, they turned out to be more subtle. They were a little more laid back physically…more cerebral.” 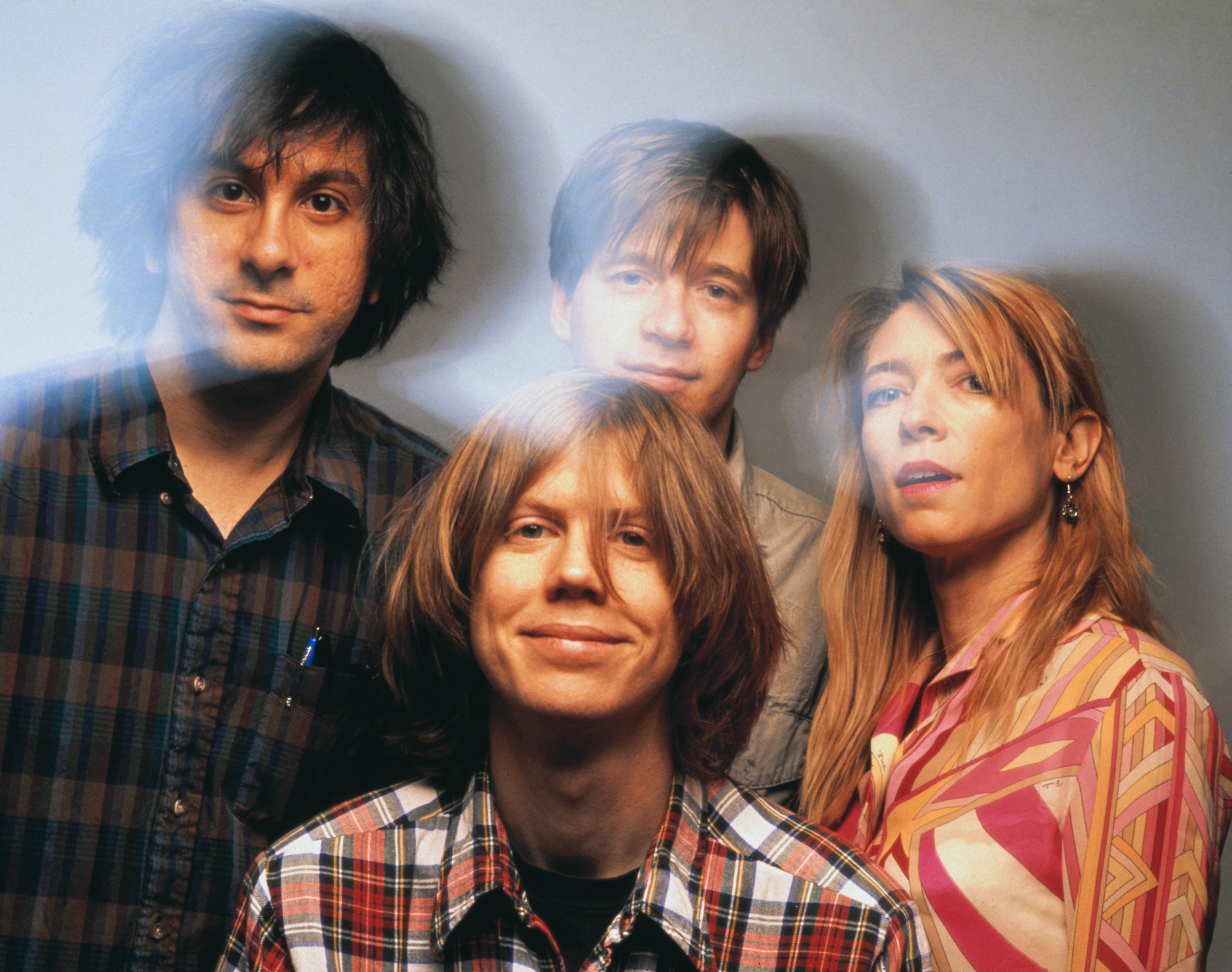 During its, uh, “less cerebral” phase, Sonic Youth was noted for having a live presentation so aggressive that the only fit comparison is to the most wildly auto-destructive moments of Iggy‘s last tour with the Stooges.

Thurston and Lee would work themselves into a frenzy, attacking their guitars and Bob’s drums with bottles, screwdrivers, microphone stands, or whatever else was handy, then hoisting their guitars by the strings and piledriving them into the stage while the amps erupted in feedback and precious bodily fluids flowed like cheap wine.

But while this may’ve been real damn pleasing to the Romans among us, others were less happy with it (a notable member of this contingent was Kim, who was mighty tired of getting hit by flying wood and metal,) and indeed, it doesn’t seem like this sort of m.o. is the best way to assure longevity.

The height (or depth) of Sonic Youth’s most vicious period occurred during a tour of the South that Thurston personally had set up. Together with another Manhattan based quartet, the Swans, Sonic Youth played to small crowds “who’d heard that we were ‘a couple of hardcore punk bands from New York,'” Thurston says with a smile. “And if that was what they wanted…Well, we weren’t going to go out there and play straight hardcore, but we did it in our own style. We got into a totally physical thing. We’d just be on stage beating the fuck out of ourselves. It was like—YEAH!”

Thurston remembers the band’s last date on its second swing through Europe as the swan song of this open-up-and-bleed policy. “We had one gig set up in London,” he recalls, a real touch of excitement entering his voice. “And we got there and we were just totally nutzoid at this point. We’d just finished a tour where every show was just me and Lee running through the audience climbing on people’s shoulders and having Lee play his guitar on other people’s teeth.”

“Lee and I are both show-offs, and once we were there in front of people we’d never see again who didn’t know English, we just let loose. We felt like, ‘Let’s take a dump and smear it on their eyeballs.'”

“So we just had this one show in London, and at the last minute they really screwed us about getting a soundcheck and when our starting time was going to be and everything else. We’d spent a ton of money renting incredible equipment for the show and had gotten in touch with all these press people, and it looked like we were gonna get completely reamed. So…we figured we’d go out and at least play a set, but once we went out there, weird things started to happen.” 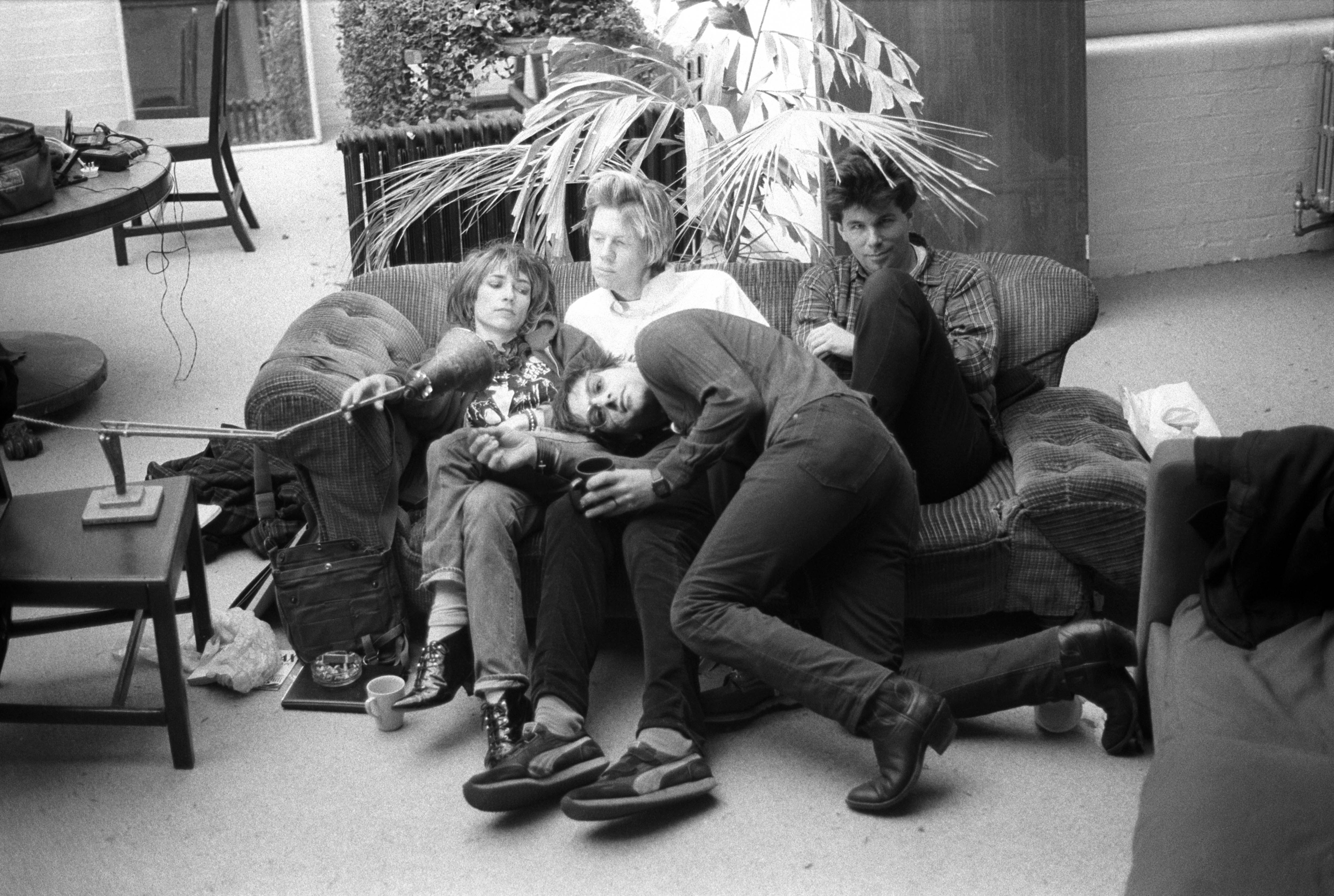 “Lee had turned his amp all the way up to 10 and was going crazy on it; then Kim’s bass string broke on the first song, which never happens; Bob’s cymbals wouldn’t stand up; my guitar was cutting in and out—it was just horrible. We’d all looked at each other backstage when we first got there like—’This is it! This is fuckin’ London! And we were horrible, so we just freaked out.”

“We started playing ‘Kill Your Idols’ [Sonic Youth’s ode to Village Voice critic Robert Christgau] really fast. I got out some of the other guitars and started using them to smash these bottles, and glass was flying into the audience. This bouncer tried to stop us, so I picked up a monitor and threw it at him.”

“The audience was screaming and pounding the stage. Lee was wigging out completely, and he blew up this Mesa Boogie amp that costs thousands of dollars—smoke started pouring out of it. Then the curtains started closing and we were trying to keep them open and smashing everything we could get our hands on, and it was just great.”

Interestingly, Sonic Youth, although third-billed for the evening in question, received the lion’s share of good press for the gig when reviews started coming out in the English press. But Thurston reckoned that this was “mostly because the other bands were so lame,” and enough was—at least for the moment—enough. The more sedate material comprises Bad Moon Rising was composed shortly thereafter.

Even with this new, more accessible set, though, it’s unlikely that Sonic Youth will achieve enormous popularity in the States. They may already be a major attraction in some European cities, such as Berlin (where they’re “treated like the Monkees,” according to Thurston), but their sound has too much barbed wire in it for digestion by America’s all-important radio stations.

Similarly, their chances for placing a video on MTV seem nil, and they’ve even collected some powerful detractors in the media. Foremost among these is Christgau, with whom Thurston waged a personal letter-battle regarding the Voice‘s treatment of New York bands in general and Sonic Youth in particular.

When asked if he’s afraid this means that he’ll never get a chance to teach the world to sing, Moore looks thoughtful for a moment.

“Maybe, but I always felt more like teaching the world to singe, anyway,” he replies.

On the corner lies a tire. Smoldering.