This article originally appeared in the June 1986 issue of SPIN.

I first interviewed Siouxsie Sioux eight years ago, just after the Banshees signed their first record deal. Punk had just fizzled and postpunk’s ground rules were being laid down. All five parties concerned still had a lot to prove, so we sat in a park by the Thames, muttering bleak manifestos at one another: It was very 1978. Somehow, I liked them.

This time we meet, just Siouxsie and I, in the more comfortable surroundings of Fortnum and Mason’s Fountain tea room. Instantly recognizable, Siouxie is just as poised, but much more amiable and—dare one say it?—professional than before. This is not to imply that she fades away into the tea-taking gentility; as we move to our seat, heads turn at that face, that hair, that jewelry, and such details as her skull-topped cane. Siouxsie splits a strawberry tart and muses, “I much prefer to be incongruous to a situation.”

A certain incongruity and aloofness has marked the Banshees’ course—slightly too willful to be called a career—during the last 10 years. In September 1976, Siouxsie Sioux (née Susan Dallion), Steve Severin, Sid Vicious, and Marco Pirroni (later Adam Ant‘s co-writer) stepped out of the Sex Pistols‘ audience and played an impromptu set—”Knocking on Heaven’s Door” mixed with “The Lord’s Prayer”—for 20 minutes. After one last minimal drum beat from Sid, the four walked offstage into punk myth: Anyone Can Do It. 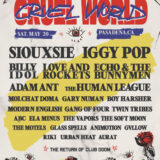 Siouxsie doesn’t think about it much now: “It was fun while it lasted and then it was very much a case of being hounded into making it serious. We were told off for being lazy.” Yet here we are, 18 singles later, talking about the Banshees’ ninth album, Tinderbox. It is a paradox that the punk group that enshrined the possibilities of the moment should now be one of its longest survivors and capable of the surprises contained on the new LP. Part of the resolution of this paradox lies in the quality that Sioux has always maintained, both in her work and in her attitude to worldwide recognition: a degree of distance, of otherness.

Despite the rhetoric, British pop is not dominated so much by the working class as by the products of suburbia. The Pet Shop Boys, Bryan Ferry, even the Sex Pistols…the list is endless. The two founding members of the Banshees, Steve Severin and Siouxsie, were both raised in the southeast London suburbs of Bromley and Chiselhurst, a comfortable area whose isolation can breed strange ideas and fantasies. Before the Banshees, these suburbs’ great gift to the world was David Bowie, whose influence on British pop has been incalculable.

It comes as no surprise, therefore, to learn that Siouxsie had an isolated childhood. Now 28, she was the youngest member of her family, 10 years younger than her sister. “I was left on my own a lot because my mother had to go out to work and there was no one else at home. From an early age I didn’t like people very much. I was never part of a gang or anything like that. I was probably a bit mad: I used to talk to myself a lot and practice being Bette Davis on the stairs. I’d wear my mother’s stilettos and use a white pencil as a cigarette—I remember learning to smoke just like Bette Davis. I must’ve been a little looney when I was young, but I was quite happy being left to my own devices.” 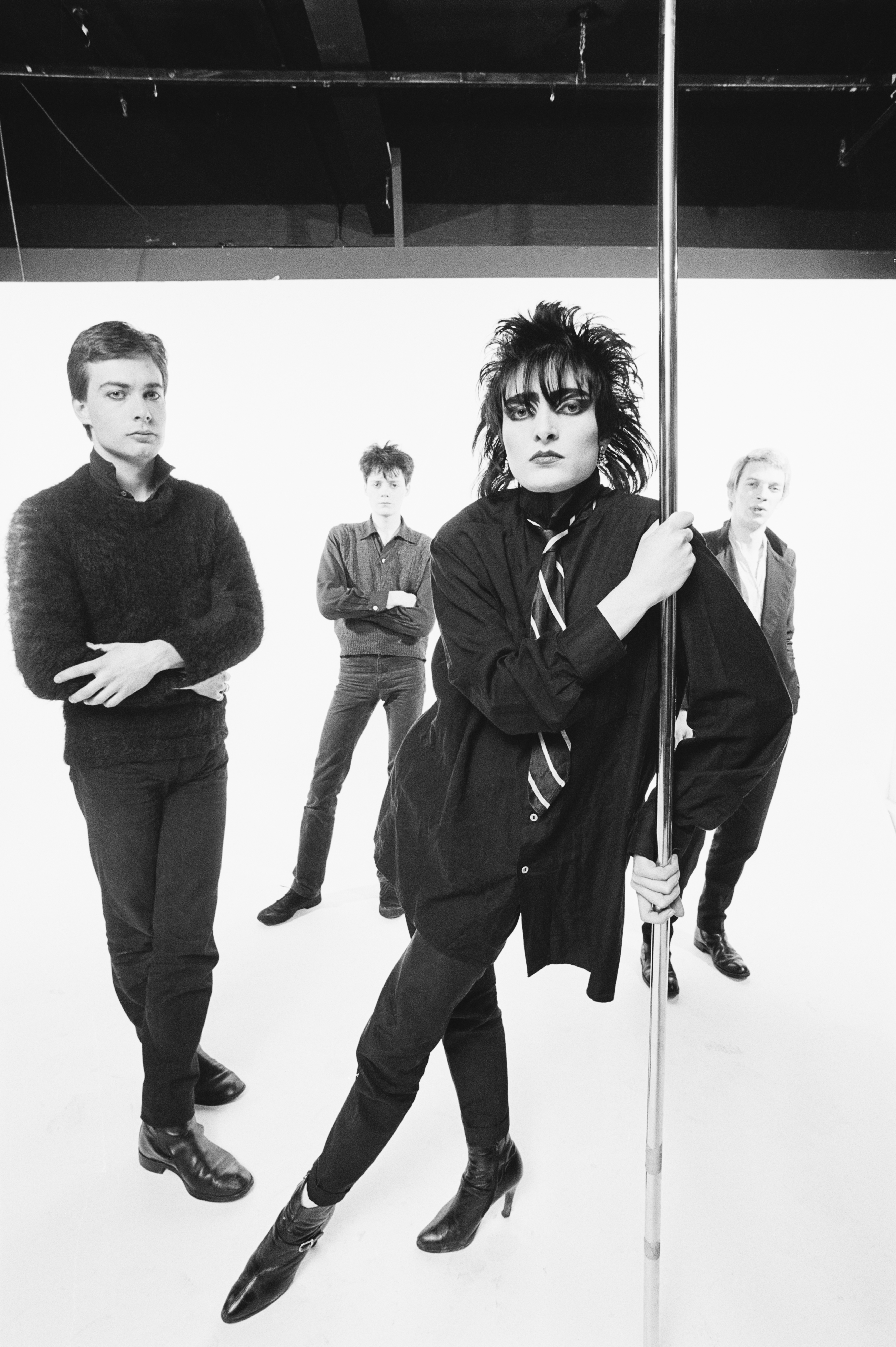 Siouxsie’s penchant for dressing up was already well developed by the time she and Severin, both confirmed Bowie-ites, went uptown to see early Sex Pistols concerts at the end of 1975. Both became part of the “Bromley Contingent,” a name given to those early punks—other than Billy Idol and Sid Vicious—whose sartorial extravagances set the style for a generation. To this day, Sioxsie remains a vastly influential fashion icon: Her wild hair, her stark black makeup, and black costume may be seen on any number of young women in any any city. Although she disclaims a certain amount of responsibility, the “goths,” almost hippie punks, are very much Siouxsie’s children; they share her dream of something else.

Siouxsie reaches into her bag and fishes out a packet of cigarettes. Her lighter is a tiny Godzilla; flame erupts from its mouth. I’m reminded of how her otherness was expressed in the Banshees’ taste for the bizarre, if not the perverse, which was much in evidence during their first days. Early in 1977, the Banshees seemed like nothing more than the latest sick punk joke, but with guitarist John McKay and drummer Kenni Morris, they traveled up and down England that year, building a large grass-roots following with songs as “Make Up to Break Up,” “Suburban Relapse,” and “Carcass” (“limitlessly in love” runs the chorus).

They were electrifying: The three musicians redefined postpunk noise, while Siouxsie was unlike any female singer before or since, commanding yet aloof, entirely modern. Well-documented on The Scream LP, these particular Banshees described the theater of absurdity and decadence promised in Steve Severin’s assumed name, taken from the S&M classic Venus in Furs.

Then it fell apart. After a lackluster second album, Join Hands, McKay and Morris left, two dates into an extensive UK tour. “We had to decide on Join Hand whether there was a group or not, and there wasn’t,” said McKay recently. It seems clear now that the tensions between punk possibility and the demands of the pop marketplace tore the group apart. McKay and Morris opted for Art and exile, while Siouxsie and Severin were left to pick up the pieces, which included about $45,000 of potential debts.

Here they showed pragmatism: within a week they had recruited new drummer Budgie, who had worked with the Liverpool punk group Big in Japan, and the Slits, and a new guitarist, Robert Smith of the Cure. The Banshees were reborn, but their initial intensity could never be recaptured.

Siouxsie’s otherness became less confrontational, more impressionistic. The sense of the bizarre was still there, but as she admits herself, it had softened: “I don’t know if we’re any less fascinated by the bizarre, but I think the subjects have been played down more.”

She goes on to explain the genesis of “Swimming Horses,” the best in a recent line of strong Banshees singles, a song of rare dignity sung around a falling piano figure. Siouxsie’s slightly watchful demeanor dissolves in her enthusiasm for telling the tale.

“It has to do with a program about Les Sentinels I saw on TV. The group is a French organization, mainly men, which rescues women from honor killing. In certain parts of the world—Greece, and maybe Morocco—if a man looks at a young girl the wrong way, the rumor spreads around town that they have kissed or slept together. No matter if it’s true or not, the girl is maimed for life or killed by her brother or father. The custom’s quite horrific. So our facilitation for the bizarre is still there, but I want to conceal the identity of the pain and not leave it a gaping or a laughing matter.”

Whereas early songs described altered mental states, while their performances described disturbances, much of their newer material has turned this outward, to impressionistic descriptions and stories of places they have passed through. 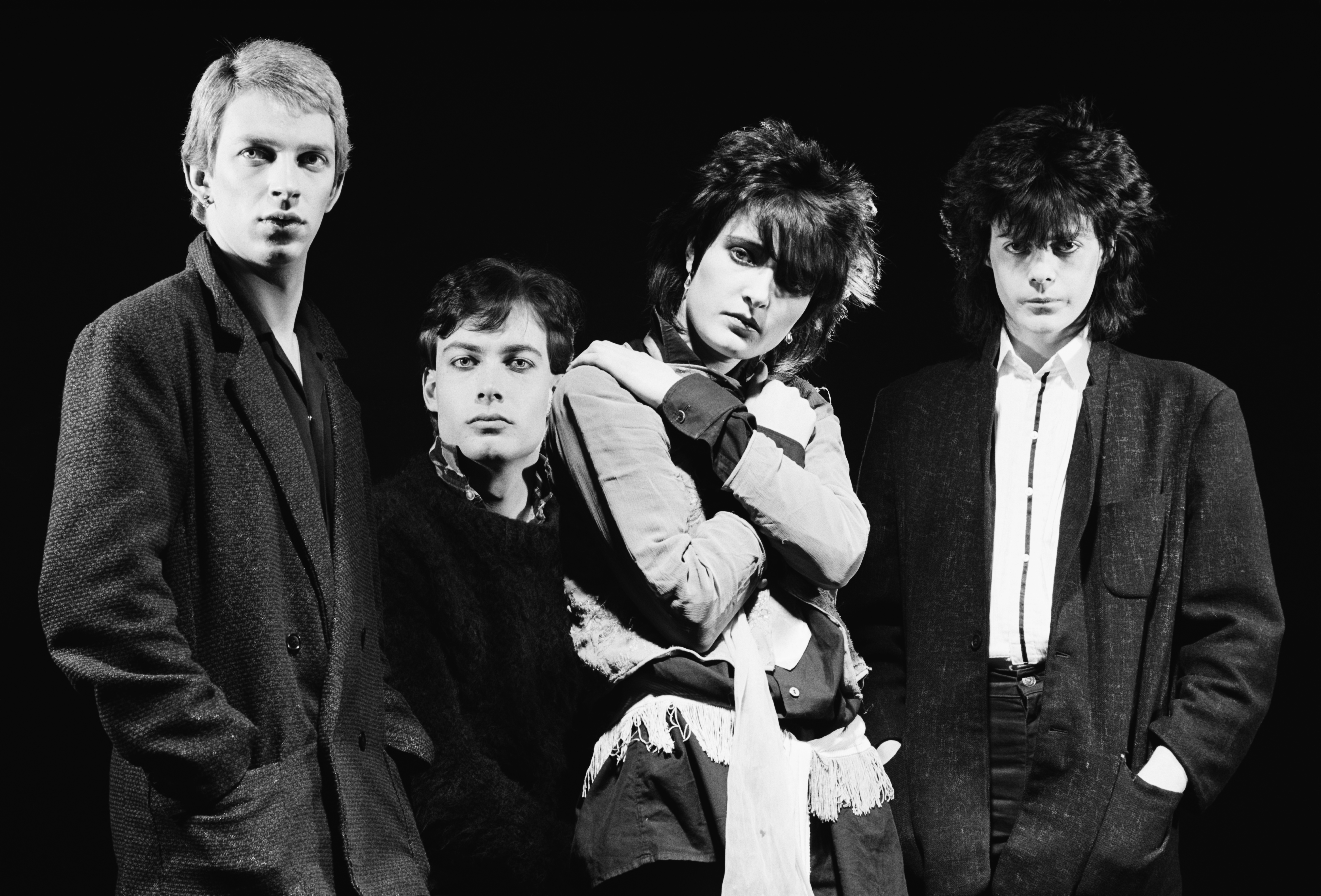 On a recent trip to Italy, where Siouxsie is a household name, the ruined city of Pompeii—preserved in lava that destroyed it nearly 2,000 years ago—caught Siouxsie’s attention.

This approach has been an entirely successful resolution to the problem of survival. Indeed, survival—a paradox in punk terms—is another thing the Banshees have been good at. The core relationship in the group between Siouxsie and Steve Severin has continued since pre-punk days, weathering several changes in guitarists—including John McGeoch of Magazine—and several misfortunes—like half the group leaving in late 1979 and Siouxsie nearly losing her voice for good in June 1982—that might have stopped the less-determined.

Severin, however, remains a shadowy, slightly catty figure: When I panned Join Hands, he wouldn’t confront me directly, preferring instead to send the amiable Budgie to do his dirty work. Luckily, Budgie was amenable to reason. Oddly enough, Siouxsie plays the relationship down. When describing the origin of “92°”—the song on Tinderbox that contains a snippet of dialogue from It Came from Outer Space—she simply says: “On certain things I’ll talk to him about ideas and he’ll go [she pulls a disgusted face]. On a few things, though, he will actually collaborate and say, ‘Well yes, I thought this and blah, blah.'”

The offhandedness of this description indicates the Banshees’ emotional control and their real relationship, which is obviously close enough; the Banshees have never worn their hearts on their sleeves, preferring to deal in abstractions rather than specifics.

The formula holds true on Tinderbox, despite a series of accidents and ill-luck during its making, once again concerning health and guitarists. Tinderbox is the Banshees’ first album since 1984’s Hyaena. Two weeks before the release of Hyaena, guitarist Robert Smith left to concentrate on the Cure; replacement John Carruthers was found at a week’s notice. Recording sessions for Tinderbox last summer ended in disputes and the sacking of producer Hugh Jones. The group’s schedule was further hindered when Siouxsie dislocated her knee while performing at London’s Hammersmith Odeon last October. It’s only just healed after months of physiotherapy.

You wouldn’t guess this from the finished product. Its scope, ease, and assurance make it a good collection for the Banshees to relaunch themselves. Carruthers fits in to the point that you wouldn’t know there was a change, and Budgie’s drumming is superb. Apart from the singles “Cities in Dust” and “Candyman” (which perpetuates the Banshees’ sinister view of childhood), the sparks fly on “The Crystal Clear Cannon” and the unsettling “Parties Fall.”

“That one’s about those wonderful-looking people who constantly go out to clubs at night, then go back to a grossy bedsitter room. Their whole day is geared to transforming themselves. I was going through a depressed state myself, I suppose, about growing old, and I worried a bit as to how long I could be Siouxsie from Siouxsie and the Banshees.”

Now that she’s become more established, Siouxsie’s often icy exterior has relaxed, and she can reveal some of her feelings. She’s a peculiar mixture, which of course is part of her appeal. 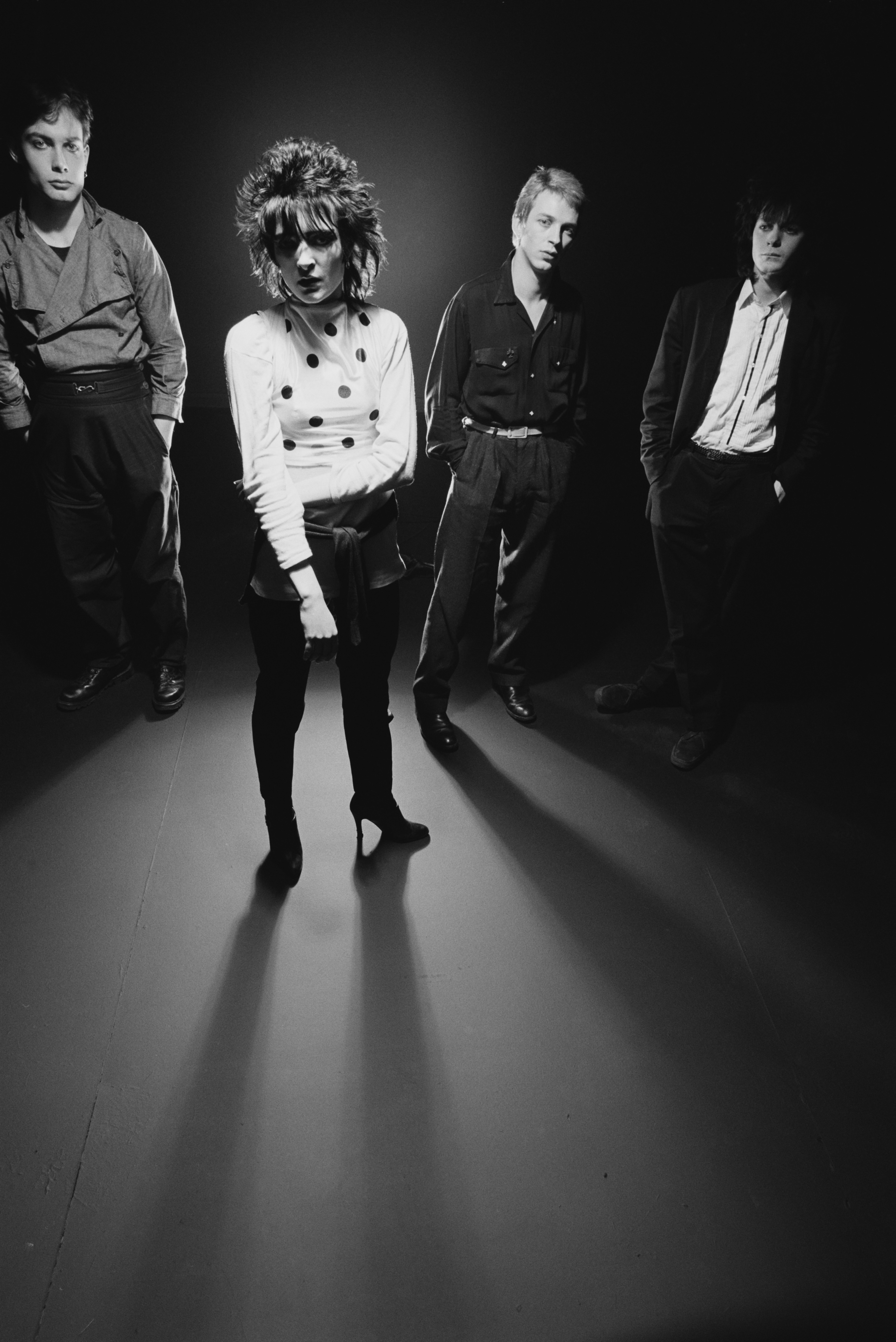 Despite almost defining the female goth, she’s nevertheless capable of self-mockery; she bursts out laughing when she reveals that the engineer chosen to complete Tinderbox was selected because of his name—Steve Churchyard.

Although you might think from the records that she could be pretentious, in person she’s quite down-to-earth and sensible—normal, almost. She retains a low public profile, and although the Banshees can be as rock ‘n’ roll as the rest of them, many of Siouxsie’s pleasures are still quite solitary; She reads a lot and enjoy’s opera’s scope and theatricality.

This tension between normality and the extraordinary is crucial to the Banshees. Ultimately—and not to underestimate their material—the Banshees’ appeal lies in suburban aspirations. Like David Bowie, Siouxsie and Severin provide role models for every kid stuck in some dull suburb who has looked in the mirror and said, “I want to be someone else. I can change myself!” Self-recreation is an age-old pop dream—just look at Andy Warhol—and the Banshees have achieved it.