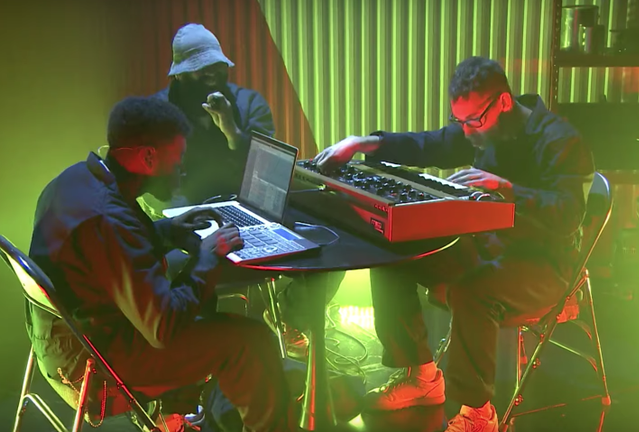 Jack Antonoff’s latest project Red Hearse made its television debut on The Tonight Show Starring Jimmy Fallon last night. The trio consists of Antonoff, beloved Top Dawg Entertainment producer Sounwave, and singer Sam Dew. The band performed their driving R&B-styled anthem “Half Love”—their third single of this summer—while seated around a small table like they were studying for an exam together. Jack Antonoff played synth, Sounwave triggered samples off of his laptop, and Sam Dew sang in his soaring tenor with his bucket hat pulled down nice and low. Red-Hearse-branded action figures were included on the stage set.

Last week, Red Hearse released a video for “Half Love,” which stars St. Vincent as a robber who drives a red hearse and is searching for Red Hearse action figures. The band also released a song called “Red Hearse,” as well as another track called “Honey,” in June. Their debut LP is set to drop this summer, though no specific release date has been announced.

Despite being busy with Red Hearse, Jack Antonoff made some time to stop by Sesame Street in June, performing “I Love Trash” alongside Oscar the Grouch. He also produced Kevin Abstract’s third solo album Arizona Baby, which was released in April (read our review of it here).