Donald Trump Retweeted an Incredibly Fake-Ass Reagan Quote About Himself

This morning, the tremendous idiot in the White House wants you to know how much everybody liked his big Fourth of July party, so he’s spent the morning retweeting various praiseful tweets, most of which came from an account called @ReaganBattalion, which is verified by Twitter, has 89,000 followers, and bills itself as “Your source for news, information, and commentary, from a conservative perspective.” But first, he retweeted an account called @reaganbattaIion, which has no bio, no verification, 289 followers, and an upper-case I where a lower-case l should be. Back in 2017, that account tweeted an image macro of Ronald Reagan shaking hands with Trump, overlaid with an ostensible quote from the 40th president in praise of the young real estate developer. Trump found it this morning, and for some obscure reason, he wrote “Cute!” as the caption for his retweet. 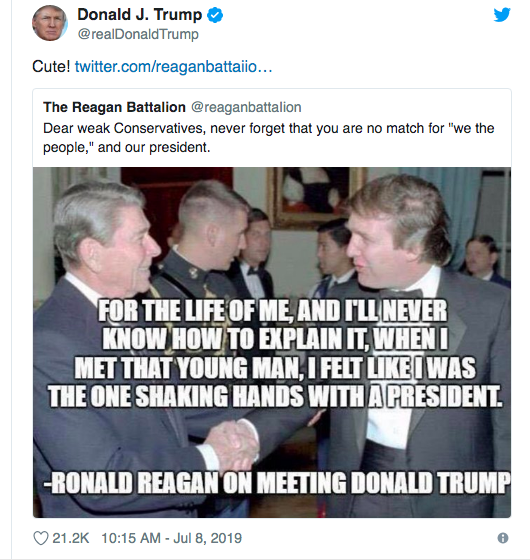 You can pretty much tell based on gut feeling alone that this quote is fake as hell: the dubious provenance; the visual presentation, reminiscent of a meme from 2008; the proliferation of fake-ass quotes just like this one from other famous people who never actually predicted a Trump presidency and are no longer around to dispute them. Fortunately, we have more then gut feeling to go on: the non-partisan fake news debunkers at Snopes investigated it back in 2016, when it first circulated on right-wing social media, and found no evidence that Reagan ever remarked on the uniquely presidential texture of Trump’s tiny palms. (The photo itself, however, is real.) During Trump’s campaign, the Washington Post ran a story claiming that, despite the future president’s occasional intimations of close ties with Reagan, “no meaningful relationship ever existed between the two men. And as Snopes points out, Reagan’s son Michael once said that his father would probably be “confused” by and disapproving of Trump’s “demeaning” campaign style.

If you recognize the @ReaganBattalion name, it’s likely because the (real, non-parody) account was responsible for publicizing the recording that led to Milo Yiannapolous’s dramatic public downfall, in which the self-styled conservative provocateur seemed to signal his approval of sexual relationships between “younger boys and older men,” and dismissive of “this arbitrary and oppressive idea of consent.” The (fake, parody) @reaganbattaIon account, which has only a handful of tweets and had been dormant for over a year before it was suspended following Trump’s tweet this morning, seems to have been established in part to show support for the disgraced Yiannapoulos. One of its other dozen or so missives read simply “#FREEMILO.” Cute!