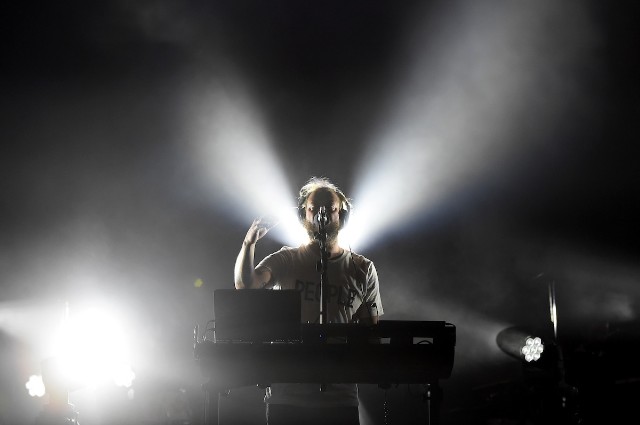 Since the “foreign roads” of For Emma, For Ever Ago began winding toward the metaphysical Ace Hotels of 22, A Million, Justin Vernon has concerned himself more with emotional specificity than with any kind of literal storytelling. Even beyond the underscores and upside-down crosses in his song titles, he deals in cryptograms: his music is about hazy but immutable memories of place and time of day—particular feelings and sensations that border on the incommunicable.

New single “Faith”—like recent release “Hey, Ma” before it—trades lyrical arcana for a more plainspoken approach to those ineffable particulars. Glitched-out strings and propulsive drum triplets prime the canvas for Vernon’s opening admissions, delivered over acoustic guitar: “Shattered in history / Shattered in paint.” Doubt and insecurity dominate “Faith,” in its lyrics as much as in its dusky electronics. “There is no design / You’ll have to decide / If you’ll come to know if I’m the faithful kind,” sings Vernon, his voice mixed low beneath the guitar and backing choir, presaging a dramatic turn. As dense, warped noise drowns out the guitar, “Faith” eventually channels this quiet uncertainty into anthemic rock, with an irrepressible energy that harkens back to previous Vernon highlights like “Perth,” or the serrated coda of “33 ‘GOD’.” The references that dot this song’s latter verses (to family, to commitments, to memory) are impressionistic, but undoubtably personal. “Fold your hands into mine,” sings Vernon. “I did my believing / Seeing every time.” It’s an expression of both profane connection and mystic union, with an overt spiritual resonance that feels appropriately like a hymn.

On “Faith,” Bon Iver chart a deeply considered intimacy. In the sounds of individual words—the way they’re cobbled together, or laced with distortion—Vernon refines his approach to reaching for the unknowable by way of the personal. And in the propulsive, sun-warmed gallop of the arrangement, he implies a placidity, ultimately choosing to end the song in a place of optimism: “And we have to know that faith decline,” he sings. “I’m not all out of mine.”