The President Is Suddenly Very Mad About the Moon? 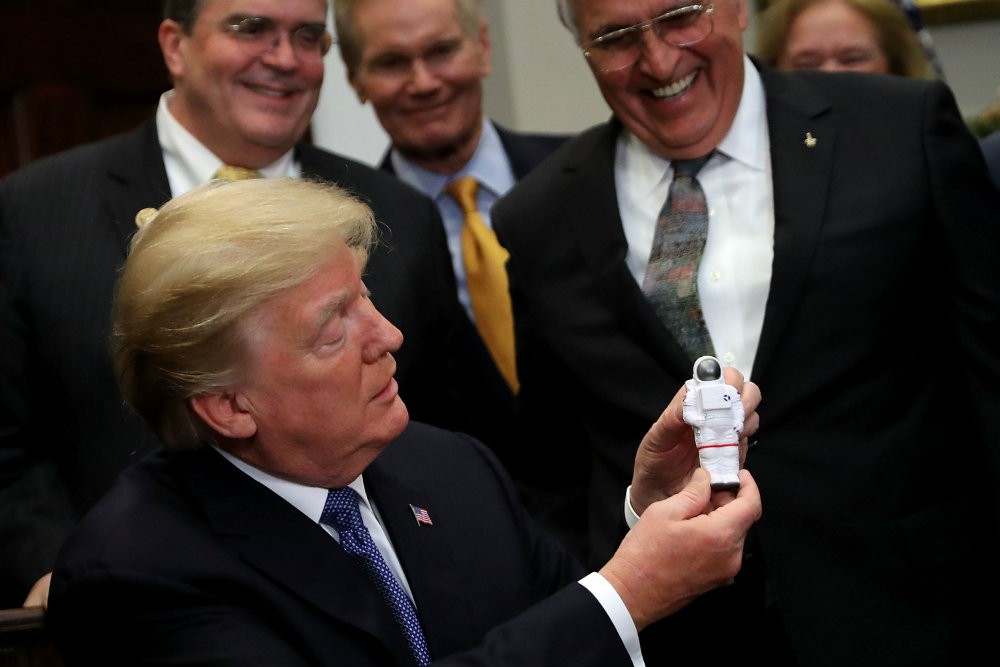 President and amateur astronomer Donald Trump took a moment Friday afternoon to opine on Twitter about the future of space travel. In what would otherwise be considered a welcome break from attacks on Bette Midler, rants about the Mueller report, and tweets filled with racist agitprop, Trump expressed a seemingly left-field desire to explore new frontiers in the solar system. “For all of the money we are spending, NASA should NOT be talking about going to the Moon – We did that 50 years ago,” Trump wrote. “They should be focused on the much bigger things we are doing, including Mars (of which the Moon is a part), Defense and Science!”

For all of the money we are spending, NASA should NOT be talking about going to the Moon – We did that 50 years ago. They should be focused on the much bigger things we are doing, including Mars (of which the Moon is a part), Defense and Science!

The confidence of Trump’s assurance that the moon is somehow “part” of Mars is remarkable. You’d be forgiven for having no Earthly idea what he’s talking about. It’s likely he was referencing NASA’s longterm goal of building an outpost on the moon to make travel to Mars and beyond easier. Garbled verbiage aside, this is a marked divergence from the pro-moon stance the president tweeted just three weeks ago—a reference, Vox points out, to the White House’s proposed if not well-thought out 2024 moon mission, to which both Trump and Mike Pence have paid lip service.

Under my Administration, we are restoring @NASA to greatness and we are going back to the Moon, then Mars. I am updating my budget to include an additional $1.6 billion so that we can return to Space in a BIG WAY!

So why has Trump soured on returning to the moon? Matthew Gertz from Media Matters thinks the tweet was prompted by a Fox Business broadcast from roughly one hour before the tweet, in which Neil Cavuto questioned why NASA would want to return somewhere they explored 50 years ago. Here’s the clip.

Trump’s weird moon/Mars tweet appears to be inspired by this Fox Business segment, which aired about hour ahead of his tweet. (ht @MattGertz)

“I understand [the moon] would be a launching point for other initiatives going further out, but I thought we would advance beyond that.” pic.twitter.com/uIaTur2KRG — Aaron Rupar (@atrupar) June 7, 2019

This wouldn’t be the first time the soft-brained president made a bizarre public proclamation after listening to criticism from a Fox News talking head, but at least he didn’t threaten to shut down the government this time. If people keep talking about the moon, maybe he will.