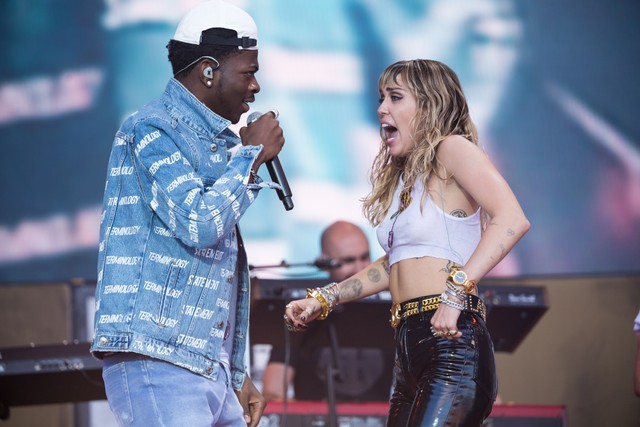 Glastonbury is taking the U.K. by storm this weekend in Somerset, England. Yesterday, Vampire Weekend hosted a surprise show on the Pyramid Stage, where they played covers of Fleetwood Mac’s “Everywhere” and Chicago’s “Saturday in the Park.” Later that night, the Killers brought out Johnny Marr and Pet Shop Boys to join them in performing “Always On My Mind,” “Human,” “This Charming Man,” and “Mr. Brightside.” Miley Cyrus also had a surprise for guests on Sunday.

During her performance on the Pyramid Stage, Cyrus brought out her country-star father, Billy Ray Cyrus, and Lil Nas X, to join her in performing their viral hit and longtime No. 1 single “Old Town Road.” Lil Nas X took a moment to commemorate the occasion on Twitter. “My first time in another country!!! Insane,” he wrote.

Elsewhere in her set, Miley Cyrus performed her recent Black Mirror song “On a Roll,” which recently received its own music video. The track interpolates the melody from Nine Inch Nails’ 1990 single “Head Like a Hole.” Miley Cyrus also performed a cover of Amy Winehouse’s “Back to Black” in her set with the track’s co-producer (and past Miley Cyrus collaborator), Mark Ronson.

Watch video footage of the performance below.