Carrie Underwood is facing a lawsuit for allegedly copying another singer-songwriter’s material for her 2018 Sunday Night Football theme song “Game On.”

In a complaint filed in Manhattan federal court Wednesday (June 19), plaintiff Heidi Merrill claims she wrote and recorded an identically-titled track in 2016. She says she pitched her song to Underwood and her producer, Mark Bright, at a Nashville conference the following year with the idea that Underwood might use it as her next Sunday Night Football theme. But Bright responded through an assistant that he’d “have to pass.”

Now, Merrill argues that Underwood’s own “Game On” is “substantially — even strikingly — similar, if not identical,” to her song, in title as well as tempo, meter, time signature, hooks, chord progression and other specifics.

“The Defendants knowingly, willfully, and intentionally copied original, copyrightable elements of the Plaintiffs’ original Work,” the complaint continues, “publicly performed or displayed the Infringing Song, and otherwise violated the Plaintiffs’ exclusive copyrights in the Work for substantial personal and commercial gain.” 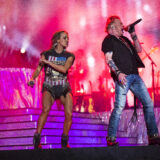 Bright and Underwood are among nine defendants named in the lawsuit, which includes EMI Entertainment, Warner Chappell Music, the NFL and NBC. In her complaint, Merrill also references a lawsuit from 2017, where Underwood and Bright faced similar accusations for the song “Something in the Water.” That case was dismissed.

Merrill and her co-writers are seeking an injunction and damages of an unspecified amount. Representatives for Underwood and Merrill did not immediately respond to requests for comment.

Compare the two tracks, below.