Bob Dylan‘s country-tinged 1969 album Nashville Skyline opens with a hair-raisingly beautiful version of his song “Girl From the North Country,” first released six years earlier and reworked here as a duet with Johnny Cash. It’s the only duet that made it onto the record, but it’s not the only one the two songwriting icons recorded together. Now, according to a Rolling Stone report, more of the material from the Cash sessions may finally reach listeners as an official release. (At least some of the material has circulated on unofficial bootlegs.)

Rolling Stone spoke with “a source close to the Bob Dylan camp” who claimed that the next installment of Dylan’s Bootleg Series, a sprawling catalog of archival material that began in 1991, might be the Nashville recording sessions that produced both Nashville Skyline and 1967’s John Wesley Harding.

“We’re thinking about possibly doing Bob’s work in Nashville from John Wesley Harding through the Johnny Cash sessions as the next Bootleg Series,” the source told Rolling Stone. “The outtakes from that period have never been heard.”

Cash joined Dylan in the studio for one day of the Nashville Skyline sessions, during which the two recorded versions of “Mystery Train,” “You Are My Sunshine,” “Ring of Fire,” “Big River,” and several other songs. 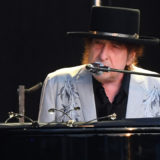 The source also provided insight into other future possible Bootleg installments, which may include releases centered on Dylan’s late-career triumph Time Out of Mind, his mid-’80s albums Infidels and Empire Burlesque, and recordings of concerts he performed as a little-known folk singer before signing to Columbia Records in the early ’60s.

News of the Nashville set comes just as fans are beginning to digest The Rolling Thunder Revue: The 1975 Live Recordings, a 14-disc box set (and accompanying Martin Scorsese documentary) about the legendary mid-’70s tour of the same name. Read Spin’s review of those releases here, and watch a live duet performance of “Girl From the North Country” below.