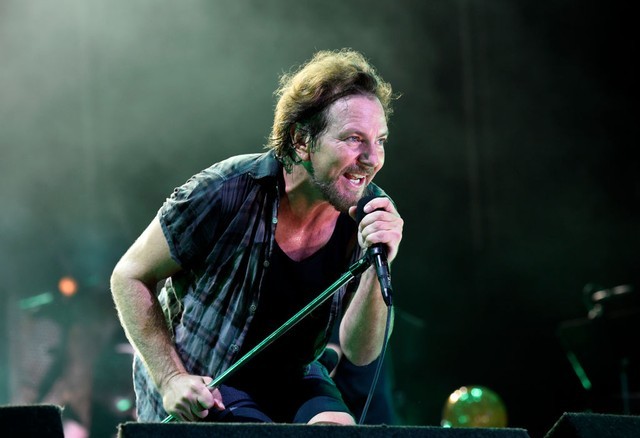 Back in 1992, Pearl Jam played a show in the Dutch city of Utrecht. After the show, he spent a while talking to one particular Dutch woman, who ended up giving him a ride back to his hotel on her bicycle. They never saw each other again, but she stayed in his head. And a couple of nights ago, they reunited.

According to the NL Times, Vedder played two solo shows in Amsterdam this past weekend, and at the Sunday night show, he asked if that young woman was in the crowd that night: “Is the woman who gave me a lift to my hotel in 1992 maybe here tonight?… I am almost certain that I would still recognize her face.” Nobody came forward. But the Dutch newspaper Het Parool took up the question. And they figured it out: The woman in question was Valeska Custers, and she gives an almost unbearably romantic account of their encounter.

Custers didn’t go to that show to see Pearl Jam; she was there for the opener, a Dutch band called City Pig Unit. After the show, she was backstage with her City Pig Unit friends, and Vedder approached her: “He was extremely shy, but I really felt a connection with him.” She helped City Pig Unit load out their gear, but she later met up with Vedder in a café, and they talked until 3AM. When he got tired, she took him to his hotel. He rode on the back of her bike, and he carried her backpack, which held her brother’s flannel shirt. Vedder forgot to give the backpack back as he was getting off.

Thinking about it years later, Custers tells Het Parool, “I still remember thinking: I’m not going to give myself to him. He’ll be somewhere else tomorrow and I’ll be one of the thousands of girls… He feels a bit like my soulmate.” She tried to meet him at a few other Pearl Jam shows over the years, but it never happened.

But someone in Vedder’s backing band showed Vedder the Het Parool article, and Vedder’s tour manager invited Custers to the solo show that Vedder played on Wednesday night in Brussels. Backstage at that show, they finally reunited and Het Parool has that story, too. Vedder reportedly told Custers, “You still have the same smile.” They talked about their spouses and their kids. Vedder remembered how Custers offered to call him a cab: “But I didn’t have any money on me!” He also wanted to give back that flannel shirt: “I made you write down your address in order to do so. I’m not sure if I still have it now, but I kept it for years at least.” Her response: “He says you can keep it.”

This is honestly some real Before Sunrise shit. The full Het Parool story is well worth your time. The first part is here, and the second is here.