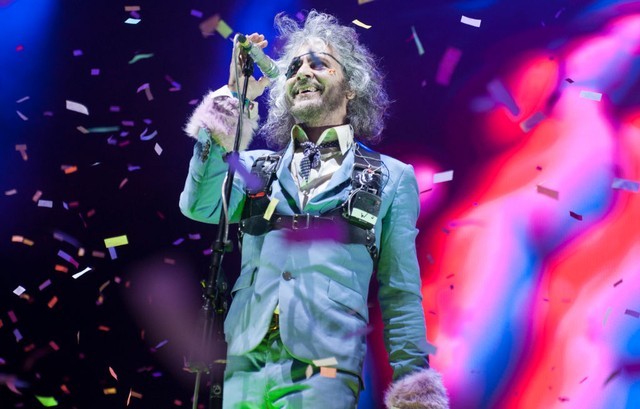 Every year, Google hosts a big event in Mountain View, California, unveiling all its new tweaks and products. And for the last couple of years, that big Google I/O affair has also involved a big afterparty at the Shoreline Amphitheatre, which has featured some big musical names — Justice last year, LCD Soundsystem two years ago. Last night, the event’s big musical guests were the Flaming Lips, who took the opportunity to use the google braintrust to come up with some tech-based ways to stage their arty goofiness: Multi-instrumentalist Steven Drozd played a song on a bowl of musical fruit.

Talking to the crowd beforehand, frontman Wayne Coyne referred to the new innovation — if I’m hearing what he said right — as “my imagine-hole AI algorithm music machine.” Knowing his crowd and playing to it, Coyne said, “For the first time in his entire life, because of the amazing technical geniuses at Google, tonight Steven is going to play a bowl of magical fruit.” This was a bowl of real fruits, all of them somehow wired so that they’d say their names, in different keys, if you touched them. There was also a row of giant inflatable fruit onstage, and those things did the same thing.

The Flaming Lips just released the Record Store Day exclusive album King Mouth: Music And Songs. It’ll get a wide release 7/19. “Strawberry Orange” is not on it.