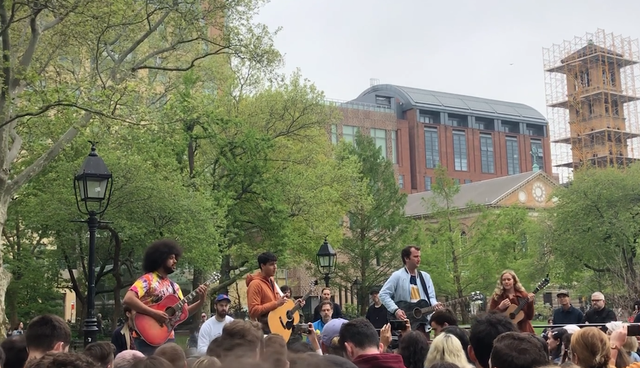 Vampire Weekend’s Father Of The Bride is out today — read our fresh cover story on the band’s first new album in six years. To celebrate, Ezra Koenig and crew headed to Washington Square Park in the afternoon for an acoustic set. They announced the performance via some posts on their social media accounts. They also streamed the show on Instagram Live.

They started off with some of their more collegiate songs, including “Campus,” “Horchata,” and deep cut “Ottoman,” then transitioned into some newer material, including live debuts for Father Of The Bride tracks “How Long” and “Hold You Now.” (Greta Morgan, the new-ish addition to VW’s live lineup, subs in for Danielle Haim.)

The last time Vampire Weekend played Washington Square Park was back in 2016 for a Bernie Sanders rally.

The band’s in the middle of a short run of New York shows: They played Buffalo and Kingston earlier this week, and on Sunday they’re throwing an all-day affair with three sets, bagels, and pizza.

Check out some video and photos from the event below. (Shoutout to our intern Keely Quinlan who captured some footage for us there!)

What are the odds that one of my favorite bands is playing for free during my lunch break?! I’m so glad that I went for my walk, THANK YOU @vampireweekend @arze #vampireweekend #washingtonsquarepark #odetothewestvillage

Vampires in the park @vampireweekend