NBA Warns Raptors About Drake Ahead of NBA Finals 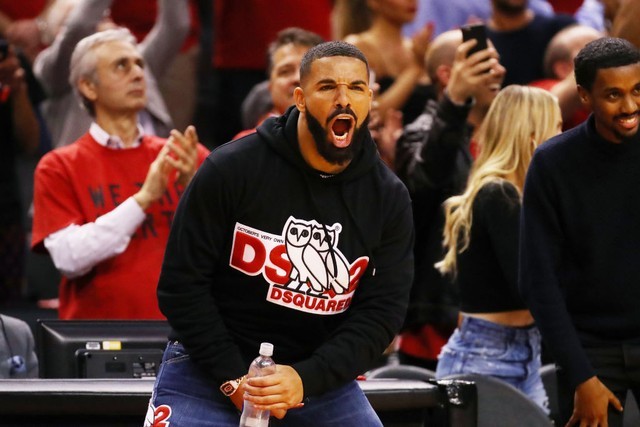 If you’ve watched any of this year’s NBA playoffs, then you may have noticed the extremely loud and distracting presence of Drake, the most popular rapper in the world. Drake has been a regular courtside presence for the Toronto Raptors, his hometown team. The team named Drake “global ambassador” in 2013, and Drake has always been a ridiculously vocal and present fan, to the point where he got into a confrontation with Cleveland Cavaliers center Kendrick Perkins during last year’s Eastern Conference Finals. This year, Drake has somehow done even more to put himself at the center of attention during the playoffs, and not even the courtside presence of a Pusha-T shirt could dissuade him. Tonight, the NBA Finals start, and the Raptors are competing for a championship for the first time in franchise history. We are about to see so much Drake.

Or maybe not! ESPN reports that NBA brass recently “spoke to” the Raptors about Drake’s involvement in the games. It seems that the league wants the Raptors to remember that Drake is essentially just a fan. During game four of this year’s Eastern Conference Finals, Drake left his seat and gave a mid-game massage to Raptors coach Nick Nurse. Presumably, the NBA wants to shut this whole thing down.

Steve Kerr, coach of the Western Conference Champion Golden State Warriors, has a good response to the whole situation: “I kind of think it’s fun, and the NBA kind of embraces the pop culture dynamic of the league and the stars and the celebrities who are out there. And we got E-40 ready for them too, so we’re in good shape.”

Let’s all savor the real possibility that, if a brawl breaks out during one of these games, Drake might come flying onto the court and try to hit Draymond Green with an RKO.