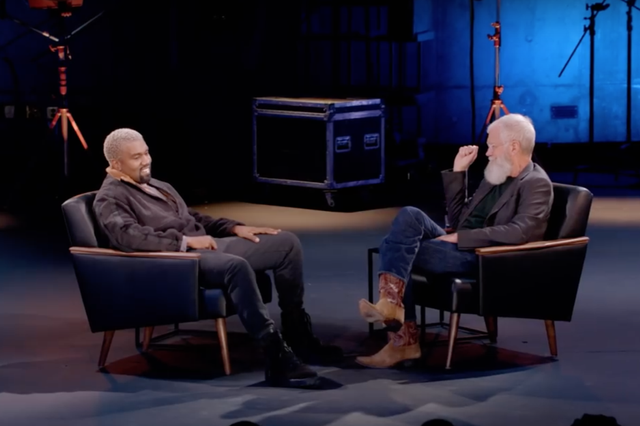 Earlier this year, Netflix announced the second season of David Letterman’s first post-Late Show interview series, My Next Guest Needs No Introduction With David Letterman. The guest list includes Ellen Degeneres, Tiffany Haddish, Melinda Gates, racing driver Lewis Hamilton, and the elusive Kanye West. When Kanye does give interviews, they can tend to turn into unpredictable rants.But according to a new report from the Daily Beast, Letterman appears to have kept Kanye in check; the interview isn’t available to stream until May 31, but The Daily Beast has shared a few key anecdotes to tide us over until then.

Speaking about his relationship with Drake, Kanye says: “Well, we had a little beef last year… He has this line that I love that says, ‘I told my story and made history’—like made his story and made history. That’s what we do, we tell our story and then people relate to that story.” He also touched on his infamous trip to the TMZ offices last year, and its being connected to his struggles with mental health: “When you’re bipolar, you have the potential to ramp up and it can take you to a point where you start acting erratic, as TMZ would put it.”

The Daily Beast also writes that Kanye speaks about his “fear” as a man in the #MeToo movement, and about divorcing the “Make America Great Again” hat from politics. Read the full preview over at The Daily Beast and watch the trailer for the second season of My Next Guest Needs No Introduction With David Letterman below.