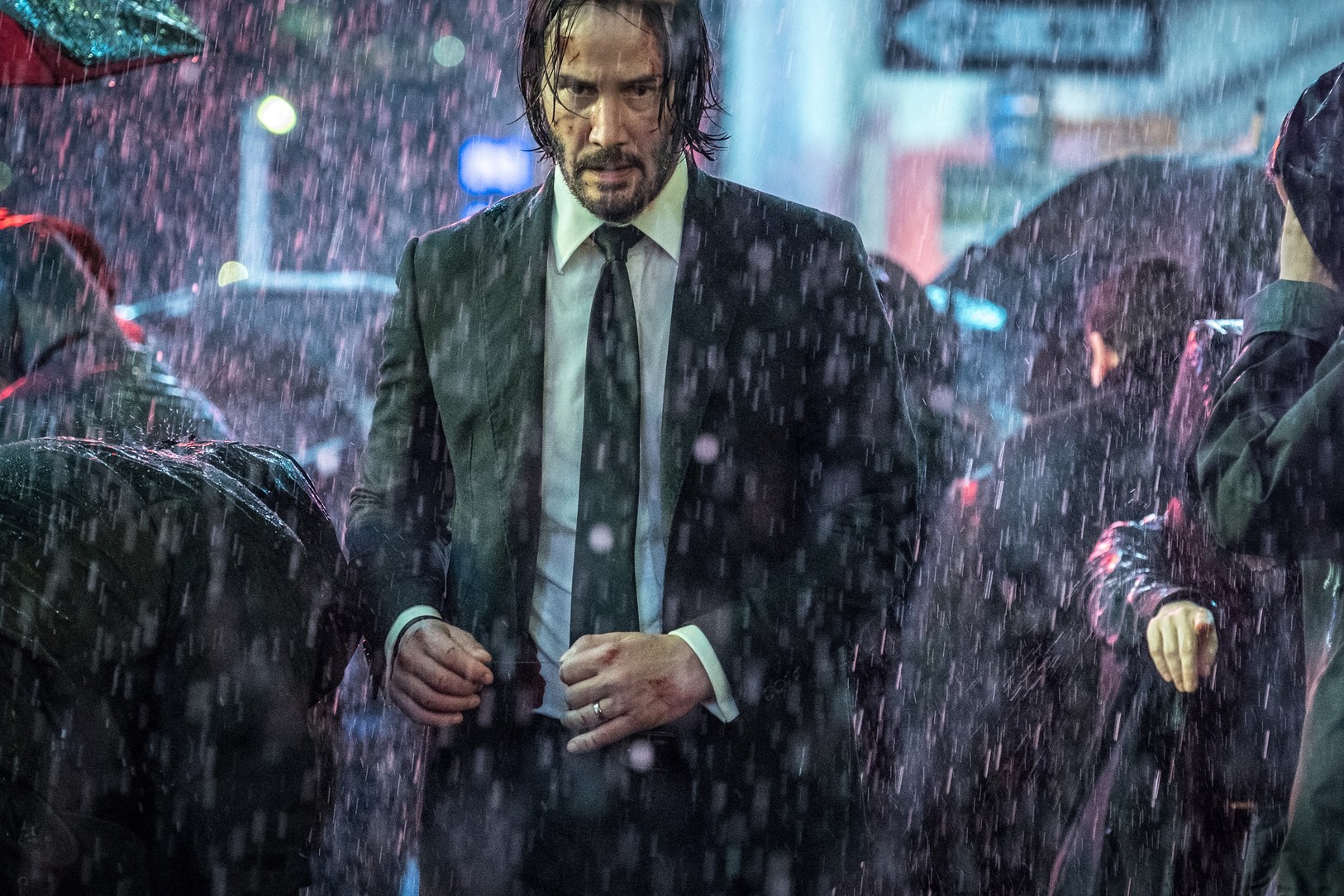 In the final minutes of John Wick: Chapter 2, our titular, patchily-bearded assassin has broken the rules. He’s killed a man on the grounds of the Continental Hotel, the holy center of New York City’s criminal underground, and has been excommunicated from the international community of assassins he’s been grappling with for the majority of his life. John Wick’s is a world where rules are everything, and to break those rules is to forfeit your life. “Rules,” proclaims the monomymous hotel manager Winston. “Without them, we’d live with the animals.” And so it is that the once-unstoppable Wick finally finds himself on his back foot.

Still, before Winston officially excommunicates Wick and sets him loose as a wanted man with a multimillion-dollar price on his head, he allows him an hour to get his affairs in order. It’s this gesture of reprieve-turned-excommunication that sets the tone for John Wick: Chapter 3 — Parabellum. John Wick has always been a badass, but in the third chapter of director Chad Stahelski and screenwriter Derek Kolstad’s blossoming franchise, he’s an eminently recognizable badass. As Winston’s deadline nears and Wick scrambles to make his preparations, a constellation of cell phones and pagers lights up the city—every businessperson, every random dog walker, every taxi driver receives word of Wick’s imminent excommunication, in scenes that underscore the magnitude of his celebrity. 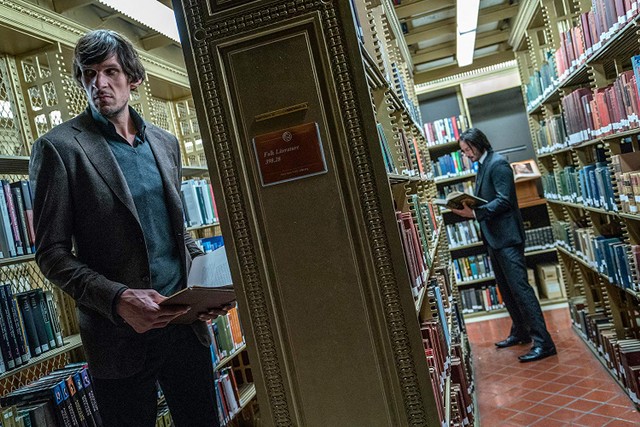 John Wick: Chapter 3 — Parabellum is at its core an action movie, but it’s also a meditation on fame and fandom. For the first time, John Wick is vulnerable—there are moments throughout the film’s 130-minute runtime when he opens himself to a stray bullet or a surprise jab—but his fame acts as a kind of protective halo. Winston, whose rule-bending deference to Wick in the closing moments of John Wick: Chapter 2 ends up jeopardizing his career, could be counted among Wick’s first fans. When two unnamed henchmen clash with Wick later in the film, they pin him with katanas before granting him a second chance, graciously stating that it’s an honor to spar with him. Wick’s central opponent, a sushi chef (the brilliant Mark Dacasos), turns out to be one of Wick’s more committed fans, professing familiarity to the point of obsession (“Is that the dog?”). Even a figure called the “elder,” apparently the world’s most senior assassin, cuts Wick some slack when he asks for amnesty.

But even though the movie isn’t really about action, its action sequences are still second to none. Wick’s first three fights in the film are a master class in deadly improvisation, with some of the most intricate and consistently creative stunt choreography you’re likely to find in a big-budget thriller. Caught off guard in the New York Public Library, Wick kills his attacker with a book; making his way to an apartment full of antique knives, he doles out justice with a flurry of flying edges; in a horse stable, powerful equine kicks become Wick’s weapon of choice. Early scenes in a neon-soaked Chinatown work as a proving ground for the lengthier, more ambitious fights that dominate the film’s second half. When Wick links up with an old partner (and her attack dogs) for a battle with what feels like hundreds of scimitar-wielding Moroccan foundry workers, everything begins to feel like a dance.

Seeing John Wick pick up an axe or a gun feels a little like sitting down to a sumptuous meal, with meticulous courses that surprise and delight in the skillful recombination of ingredients. There are no rules to these fights, outside of their over-the-top internal logic. And rather than adhering to any particular playbook, they luxuriate in their experimentalism. Stahelski modulates his typically breakneck pacing with the occasional abrupt pause for effect, which allows for an almost vaudevillian approach to physical comedy; it’s a beat he recycles from John Wick: Chapter 2, when a gun battle is interrupted by unwitting passengers on subway car, though nothing in Chapter 3 is quite as overtly funny. 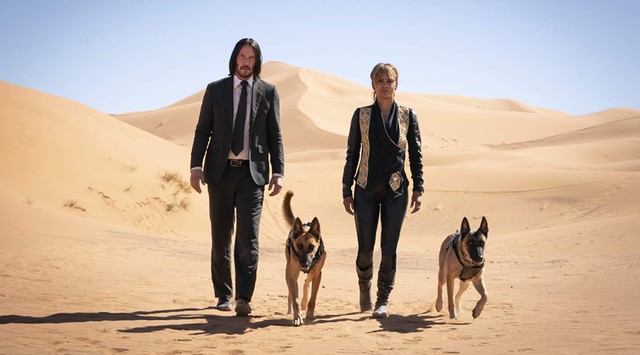 The new film also deepens the mythos of John Wick with reasoned worldbuilding that never feels labored over. New York’s Continental Hotel is part of a larger, international network of Continental Hotels? Fine. There’s a man with unchecked power over the international assassin community living somewhere in the Sahara? Perfect. John Wick is actually a Belarusian orphan named Jardani Jovanovic, adopted into a criminal training academy at an early age by a mysterious group of Romani gangsters? Sure. Revelations like these are mentioned in passing without much explanation, and are easy to swallow as a result. John Wick: Chapter 3 — Parabellum never lingers on dialog, preferring to tell its stories through set pieces, fight sequences, and searing glances.

Mythos is ultimately folded into the panoptic nature of the assassins’ highest governing body, the High Table, and its commitment to a thoroughly rule-bound society. The High Table sees all, knows all, calls all the shots. Its members are nameless, faceless, and appear to hold absolute power. John Wick, now the most famous man alive, stands in stark opposition to their tactics, and poses a direct threat to their way of life. That the High Table’s henchmen are themselves devoted fans of Wick’s makes them vulnerable. The longer Wick rampages across the world, the greater the chances of his increasingly high-profile antics destabilizing the community.

Thrust into unlikely celebrity in the wake of that first broken rule, Wick has no choice but to continue existing outside the law as a universal icon with a target on his back. In a world controlled by anonymity, where an assassin’s most valuable and vulnerable asset is identity, Wick’s most radical act is in daring to stand out.