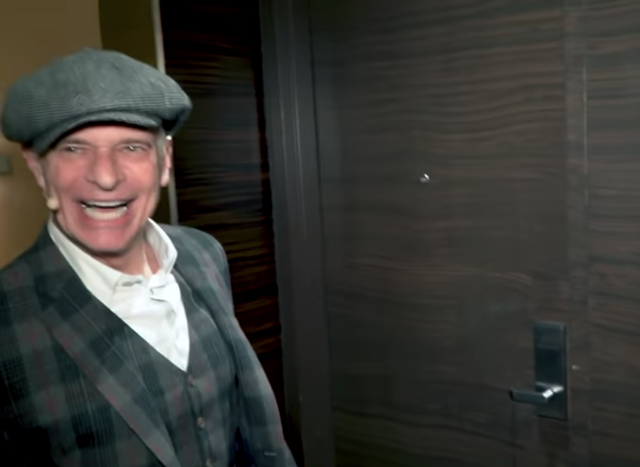 Here are some things I learned today about David Lee Roth, the jovial veteran rock star best known as Van Halen’s original frontman: 1. He recently started a video podcast called The Roth Show, viewable on YouTube. 2. He was in Las Vegas earlier this month to attend the EDM festival Electric Daisy Carnival. 3. At his Vegas hotel, he surprised the bachelor party across the hall after someone in his entourage heard Van Halen blasting from their room. 4. He filmed this encounter and uploaded it to The Roth Show’s YouTube channel last week.

Sadly, the video doesn’t exactly go as planned. Roth comes knocking, announcing himself as “a happy neighbor,” but when the people inside open up, they do not appear to freak out. They don’t invite him in to join the party. They don’t even really seem to know who he is. They basically politely smile and nod until he goes away. Disappointing for Diamond Dave! But apparently not so disappointing that he would pass up the opportunity for content.

Remember when Roth strongly hinted Van Halen would be touring stadiums this year? So much for that, huh!