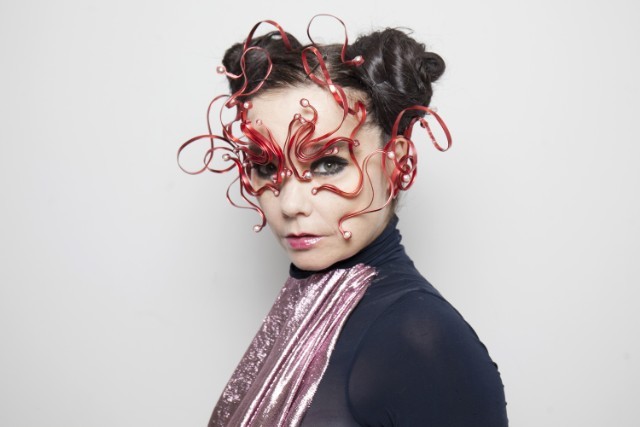 The Icelandic musician gave a rare interview to The New York Times in which she talked about the performance, likening it to “digital theater” or a “sci-fi pop concert.” It features intricate costumes and video projections and immersive sound and a 50-person Icelandic choir. The show, which is based around music from her latest album Utopia, is described as a “feminist fairy tale.”

In the feature Björk reveals that she recently became a grandmother — congrats — and that she is in love! And she also says that she hasn’t made a penny in the last 20 years: “I’m lucky because I was from the generation that I could actually buy myself a house, because I sold CDs in the ’90s,” she told the Times. “I got a couple of houses and a cabin in the mountains. I’m O.K. But I probably haven’t made a penny in the last, I don’t know, 20 years. It just all goes back into my work — and I like it that way.”

Elsewhere, she likens flutes to “a baby albino giraffe” and, yes, expands on that: “Like, they’re kind of furry and they’re kind of clean. but they’re not as clean as you think, because they’re actually giraffes.” Classic Björk!

Check out videos of the two live debuts below, along with some previews of what the show will look like, and a setlist of the performance.

this show seems absolutely next level out of this world! i’m excited to get to know it over this coming month and discover all the intricacies and logistics behind it – but one thing is certain, which is that björk continues to innovative on all fronts even some odd 30 years into her career✨if anyone who was there has any additional information they’d like to share, feel free to DM me! in the meantime, we have the next show to look forward to in 3 days! #bjork #utopia #cornucopia

876 Likes, 15 Comments – Next Show – May 9 – NYC (@bjork.updates) on Instagram: “this show seems absolutely next level out of this world! i’m excited to get to know it over this…”

Cornucopia performances will run through June. They’re all sold out.