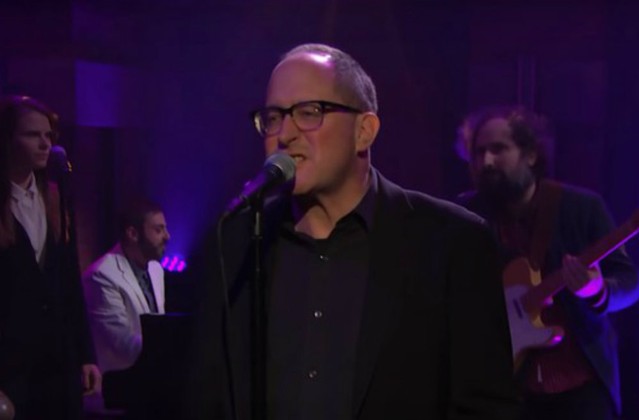 Late-night hosts like everything. They have to. It’s a professional obligation. They tell jokes, and then they make enthusiastic sounds about whatever new cultural products their guests are pushing. That’s the job. But every once in a while, you can get some insight into the things that late-night hosts actually like. Case in point: Seth Meyers really likes Craig Finn.

It’s not just that Meyers is the kind of aging indie rock guy who will always hold a flame for the Hold Steady, the way some of us are. (Hi.) It’s also that Meyers and Finn are friends. They did a Talkhouse podcast together a couple of years ago. Meyers has had Finn on his show multiple times, both solo and with the Hold Steady. And now that Finn’s got a new album out, he was back on Late Night With Seth Meyers last night.

The new Craig Finn joint I Need A New War just dropped, and so Finn sang the blustery but ruminative “Something To Hope For” on the show. And he made a whole production of it, playing with a full band, a horn section, and a trio of backup singers. And he wore a suit! For someone who has seen Craig Finn sweat through so many generic button-downs at Hold Steady shows, it’s fun to see him clean up so nicely. Watch the performance below.

I Need A New War is out now on Partisan.