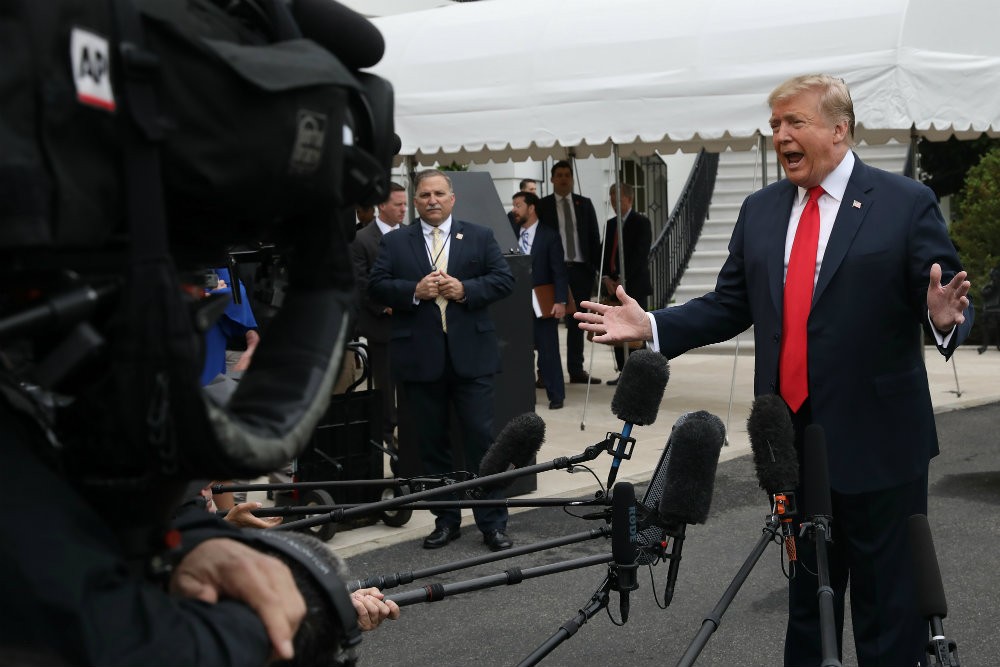 President Trump held a doozy of a press spray Friday morning when he was leaving the White House en route to Indianapolis to give a speech at an NRA event. Prompted by the Joe Biden presidential campaign announcement video excoriating Trump for his notorious Charlottesville “both sides” comment, one reporter asked if the president still believed there were “very fine people” among both sides of the protestors, including the side with the neo-Nazis who chanted “Jews will not replace us.”

“If you look at what I said, you will see that that question was answered perfectly,” Trump told reporters. “I was talking about people that went because they felt very strongly about the monument to Robert E. Lee — a great general, whether you like it or not.” He added: “I’ve spoken to many general here at the White House and many people thought, of the generals, he’s maybe their favorite general.”

He claims the ‘very fine people’ remark was about people who “felt very strongly about the monument to Robert E. Lee. A great general, whether you like it or not.”
Via Politico pic.twitter.com/01W4IwGx8y

According to this logic, there were “very fine” history buffs who felt it was worth their time to march with mobs of tiki torch wielding white nationalists chanting “blood and soil” because they love historical monuments that much, especially monuments erected to honor traitorous generals who wanted tear a sovereign nation asunder so that they could enslave black people with impunity.

Another flaw Trump’s argument concerns the fact that the deadly “Unite the Right” rally, which resulted in the murder of anti-racist protester Heather Heyer, wasn’t organized with the intention of preserving a Lee monument in Charlottesville, but was advertised as a white nationalist meet up for far right fascists who had only previously interacted with each other online.

In any case, it’s alarming how often the traitorous general gets praised and defended by members of this administration.