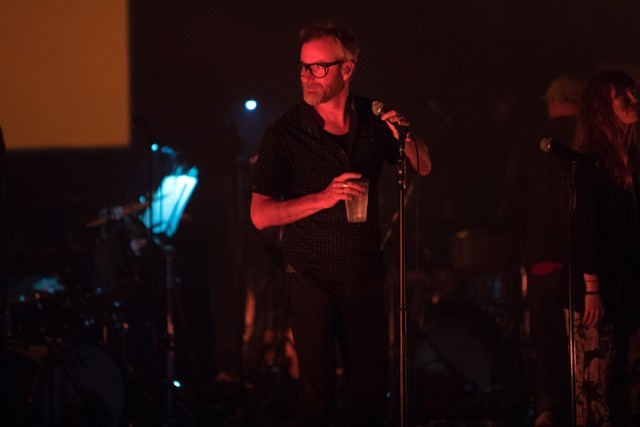 The National surprised a lot of us early this year by announcing plans to release their new album I Am Easy To Find less than two years after 2017’s Sleep Well Beast. The band had been taking longer and longer between albums, so a two-year gap practically felt like the band was working at a sprint — especially since the new one is a whopping 16 tracks long.

In a sense, I Am Easy To Find has arrived even earlier than expected. The National have begun performing their special engagements promoting the album, at which director Mike Mills is screening his companion film. The first two happened in Paris and London last week (the photo above is from the London gig at Royal Festival Hall), and last night they brought their massive production to NYC’s Beacon Theater, where they performed every song on the new album. As Brooklyn Vegan points out, they did so with help from a sprawling cast of collaborators including Julien Baker, This Is The Kit’s Kate Stables, James McAlister, Mina Tindle, a string section featuring Yuki Numata Resnick, and the Brooklyn Youth Chorus.

There’s a lot of footage from the performance online, including “Not In Kansas” and “Oblivions,” both of which the band debuted last week in Paris. The latter was a big ensemble production featuring Baker and others. Also online is footage of “Dust Swirls In Strange Light,” which the National played for the first time last night. And although they’ve been playing “Light Years” and “So Far, So Fast” for several months now, true heads will probably enjoy the high-quality footage of those songs captured last night too.

Dig into it below — and if you find footage of “Her Father In The Pool” and “Underwater,” the other two songs they debuted last night, let us know!