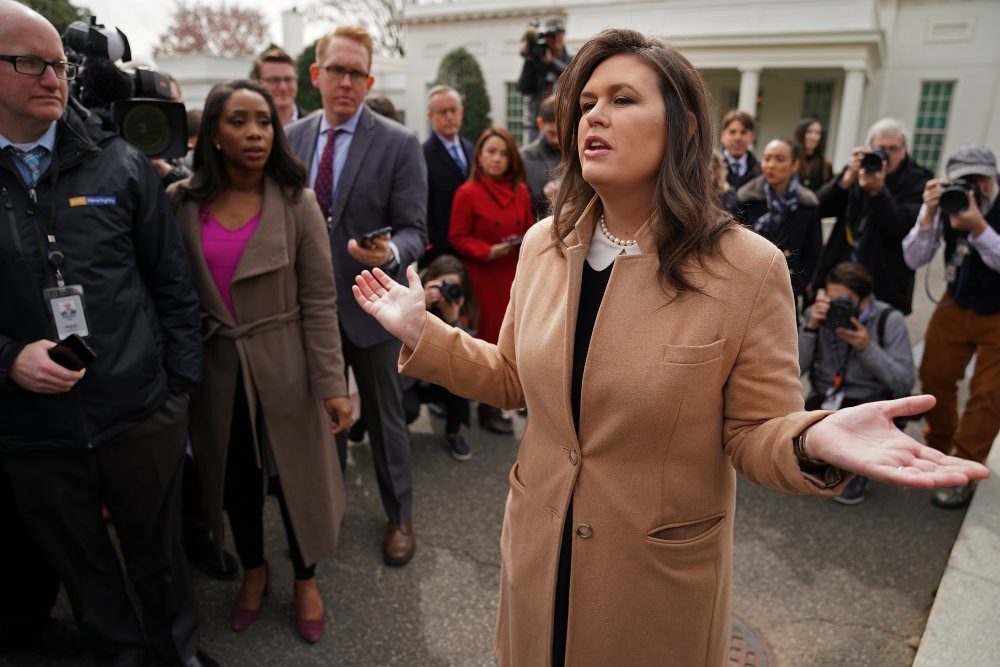 One of the many embarrassing revelations contained in the Mueller report concerns White House Press Secretary Sarah Huckabee Sanders, who admitted to the Special Counsel that she lied to the press about one of the reasons President Trump fired former FBI Director James Comey.

The fact that Sanders blatantly lied isn’t a revelation in and of itself. We know Sanders lies. She does it every time she talks to reporters. It is, in part, the press secretary’s job to spin the truth on behalf of their boss. But the flacks for Trump are something of a special case given how clumsy and absurd their lies tend to be in order to cover for a president who is seemingly incapable of telling the truth under any circumstances.

From Mueller’s report [emphasis ours]:

The president’s draft termination letter also stated that morale in the FBI was at an all time low and Sanders told the press after Comey’s termination that the White House had heard from ‘countless’ FBI agents who had lost confidence in Comey. But the evidence does not support those claims. The president told Comey at their January 27 dinner that ‘the people of the FBI really like [Comey]…No evidence suggests that the president heard otherwise before deciding to terminate Comey, and Sanders acknowledged to investigators that her comments were not founded on anything.

The report suggests that Sanders just wholesale made up “countless” rank and file FBI agents who were supposedly beating down the White House door to thank Trump for firing the boss they allegedly hated.

Here’s a clip from the May 2017 briefing when Sanders told Fox News reporter John Roberts that she says she can “speak from personal experience” because she has “heard from countless members of the FBI that are grateful and thankful for the president’s decision” to axe their boss. She then claimed to have heard from “a large number of individuals, and that’s just myself.” When challenged by New York Times reporter Michael D. Shear, she claimed to have received “emails, and text messages” from FBI agents rejoicing over Comey’s dismissal. We’re now learning that those “emails and text messages” were completely made up.

Mueller’s report said Sarah Huckabee Sanders told investigators she made comments to reporters that were “not founded on anything.” Here’s that moment 👇 pic.twitter.com/cqrnTqKDLa