Veteran rock star Mark Lanegan has been keeping a steady output of full-length albums flowing in the past few years. His last release was 2017’s Gargoyle. Now, the former Screaming Trees leader and longtime Queens Of The Stone Age associate is returning with another Mark Lanegan Band full-length out in October, Somebody’s Knocking.

Today, Lanegan stars in a new music video for the single “Stitch It Up,” the first time he’s appeared in one of his own videos for 15 years. The video also features Donal Logue as Jimmy The Cab Driver, an unfortunately boisterous character he used to portray on MTV in the ’90s. Throughout the video, Lanegan re-enters Jimmy’s cab several times around Los Angeles in varying outfits (disguises?) ranging from a homeless man to an LA Kings fan.

Lanegan had this to say on making the video:

Had a blast making this video. We had some friends over for dinner and Joe Cardamone met Donal Logue there and they hit it off. When I later talked to Joe about directing a vid he immediately said “Jimmy The Cab Driver” I called Donal and he laughed for like ten minutes and was totally into it. My head was pounding from laughing so hard the day of the shoot. It was extremely tough to keep a straight face when Donal was in character, he turned into an updated version of Jimmy so fast. Both Joe and Donal are brilliant. There’s a reason it’s the first video of mine I’ve been in for the last 15 years.

Somebody’s Knocking is out 10/18 via Heavenly Recordings. Pre-order it here. 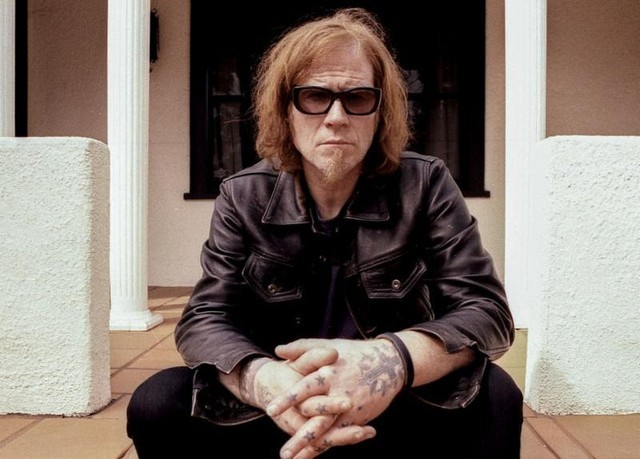