Amber Heard is asking a Virginia judge to throw out Johnny Depp’s $50 million defamation lawsuit against her, arguing that the legal fight should play out in California, and recounted a history of alleged violence in shocking detail.

In March, Depp sued his ex-wife for defamation following her December op-ed in The Washington Post centering on domestic abuse. The piece doesn’t name Depp but was widely interpreted as being about the Pirates of the Caribbean star because of previously reported violence allegations in connection with their 2016 divorce and ongoing media coverage of their volatile relationship. Depp contends Heard was the abusive one, and her allegations against him are a hoax.

Heard’s attorney Eric George on Thursday filed a motion to dismiss the complaint, “so that Mr. Depp’s meritless claims may be tried and disposed of, once and for all, in Los Angeles, California.” As far as she knows, Heard has never stepped foot in Virginia. Plus, George argues, the alleged damage to Depp’s reputation happened in L.A. — where the parties and the expected witnesses live.

George argues that Depp has been distorting the truth and his suit is “an all-too-transparent ploy to stanch the ongoing damage to his reputation as a Hollywood star.” 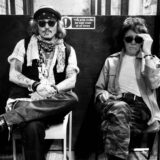 “Ostensibly vexed by the absence of any literal falsehoods in the Op-Ed, [Depp] takes issue with an implication he has imagined is contained within the Op-Ed, namely, that he had abused Ms. Heard during the course of their marriage,” writes George. “Setting aside whether any such implication is reasonably inferable, the only factual questions that will require resolution in this action are whether, in fact, Mr. Depp actually abused Ms. Heard (rendering even the imagined inferences truthful) and whether Ms. Heard acted with malice.”

The filing states there were “dozens of violent episodes” throughout their relationship, and litigating in California would force Depp to prove early on that he has a likelihood of prevailing on his claims because of the state’s strong anti-SLAPP statute.

According to Heard’s declaration filed as an exhibit, Depp allegedly first hit her about a year into their relationship.

In extreme detail, she describes several instances of violence including one from March 2015 in which she says Depp’s attack left her “naked and barefoot, covered in alcohol and glass.” That trip to Australia is when Depp severed the tip of his finger, which temporarily shut down production of Dead Men Tell No Tales. He claims she threw a vodka bottle at him, and she says he cut it while slamming a phone against the wall. “On the third day of Johnny staying awake without sleeping, I came downstairs to find numerous messages Johnny had written to me around the house, on the walls and on my clothes, written in a combination of oil paint and the blood from his broken and severed finger,” Heard recalls. Depp’s security team eventually came in, she says, and he was rushed to the hospital. Back in L.A., she says friends, family, co-workers and medical professionals saw the injuries to her face and body. “To this day, I still have scars on my arms and feet from this incident.”

In December 2015, Heard claims she told Depp she was going to leave him and he screamed “something like, ‘I fucking will kill you'” and shoved her face into a mattress. “I worried that Johnny was in a blacked-out state and unaware of the damage he was doing, and that he could actually kill me,” states Heard’s declaration. “To this day, I do not know how the fight ended.”

With regard to the widely publicized May 2016 incident in which police responded to a 911 call at their penthouse, Heard said she declined to give a statement to the officers on scene because she feared an “international media incident.”

In the event the Virginia court declines to dismiss Depp’s complaint because of the venue, George argues it should be dismissed under either California or Virginia’s anti-SLAPP statute.

Heard previously initiated arbitration against Depp for violating a nondisparagement agreement negotiated during their divorce. She says he defamed her in several media outlets last fall by giving the impression that she falsely claimed to have been physically abused. The actress argues the statements, including ones made by Depp’s lawyer, Adam Waldman, on Depp’s behalf to The Hollywood Reporter, were made with malice and that she is entitled to punitive damages.