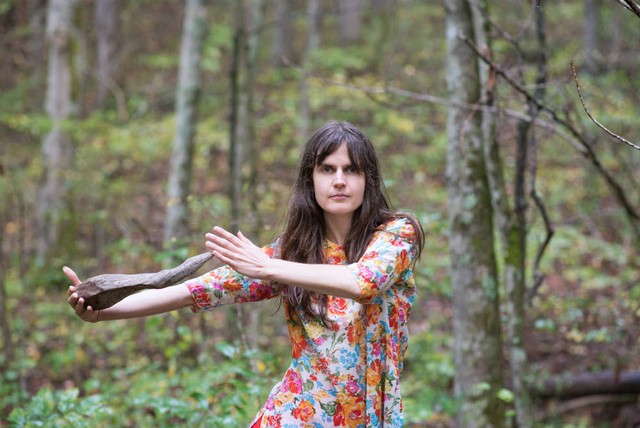 Welcome to Left Field, a new Spin column that aims to investigate and celebrate music at the fringes of genre, sensibility, and commercial appeal. Our focus, broadly stated, is on experimental music, and we won’t be pedantic about what that means. Abstract electronic technicians, flowery folk weirdos, serrated string quartets, improvisers of all kinds, punk deconstructionists, transcendental noisemakers, stoned psych jammers with vocals recorded into busted telephone receivers and guitar tones like dying animals—we welcome them all.

We’ll aim to keep this column open-ended and freeform, much like the music we’ll be covering, meaning future editions might contain interviews, essays, capsule album reviews, and probably some other stuff we haven’t thought of yet. For the first installment, we’re highlighting two notable releases that you may have missed in the long hangover of early 2019, from instrumentalist-composer-auteurs who exemplify two distinct approaches to working with live instruments and electronics.

Sarah Louise Henson is a guitarist, and Sage Fisher a harpist. On their new albums—released under the names Sarah Louise and Dolphin Midwives, respectively—they subsume their playing within oceans of electronic sound. For Henson, the processing happens after she’s already recorded her guitar improvisations, which she treats like a sculptor might treat a pile of raw material: twisting them into new shapes, or bringing out their natural contours, until a form emerges. The late Mark Hollis called this approach “arranged spontaneity,” and it has roots in the psych-jazz cut-ups Miles Davis made with producer Teo Maceo in the late 1960s and 1970s, as well as well as avant-garde tape music stretching back to the musique concrète of 1940s France. For Fisher, the manipulations are more like an extension of the playing itself. In live performance, she can be seen sending her voice and harp through a formidable chain of effects pedals, smoothly shifting between plucked strings and twisted knobs, transforming the sound as it happens in real time.

Both artists explore tensions between fluidness and structure, intuition and forethought, chaos and control. Their music reflects these push-pull dynamics as they exist in the human psyche, and in the natural world around them. Read more about each album below.

Sarah Louise Henson knows how to turn her instrument into an ensemble. The North Carolina musician first made her name as a solo fingerstyle guitarist, combining elements of drone and Appalachian folk into sparkling streams of harmony, with each of her instrument’s 12 strings contributing to the current. After two records with varying collaborators and contributing players, she’s back by herself on Nighttime Birds and Morning Stars, and with an entirely new way of working as her own accompanist.

Though it maintains a connection to Henson’s earlier work, Nighttime Birds and Morning Stars is decidedly not a folk album. Henson composed it by recording her own improvisations on electric guitar and heavily editing the results, using electronic processing to shape her intuitive musical gestures into forms that are not always recognizably guitarlike, or even human. Single notes stretch out long beyond their natural point of decay; melodic runs speed up artificially until they begin to resemble bird calls.

Uncanny ripples mark even Henson’s most traditional playing on Nighttime Birds and Morning Stars. The introduction to “R Mountain,” the album’s second track, features a procession of repeatedly plucked chords that slowly diverge from themselves and dance around their reflections, as if multiple tapes of similar (but not identical) performances were playing at the same time. Henson’s high and plaintive singing voice makes a few brief appearances, too, like an echo of a forgotten rural singer haunting this new and unfamiliar landscape.

Nighttime Birds and Morning Stars does not attempt to offer you the unmediated sound of a musician playing her instrument in a room, or even the illusion of such a performance, and in that sense, it is Henson’s most artificial-sounding album. But it is also her most natural-sounding work, in the sense of actually sounding like nature. The throughline in Henson’s diverse catalog, aside from the guitar itself, is a sense of reverence for the world of plants and animals: Deeper Woods, for instance, features multiple tracks titled after species native to the forests and mountains of her home state. For the first time on Nighttime Birds and Morning Stars, these devotionals to the wilderness also feel like representations of it—psychedelic sound paintings of meadows and creek beds, with Henson’s guitar playing the role of all the creatures and constructing the environments they inhabit. Her use of digital technology brought her closer to this realm, not further away from it.

It must have taken some bravery for an artist like Henson, who came up in the relatively cloistered world of “American primitive” guitar, to make an album like this, which bears few traces of her grounding in traditional music or overt displays of her considerable instrumental skill, and often recalls ambient electronic music more than down-home country blues. (Anyone who enjoyed Kelly Moran’s 2018 album Ultraviolet, on which the experimental pianist applied similar electronic processes to her own instrumental playing, should give Nighttime Birds and Morning Stars a listen.) It’s also worth remembering that John Fahey himself, the style’s founding father, was far from an aesthetic conservative, conveying his fingerpicked odysseys through unorthodox production and layering them with experimental tape collages. Viewed from one direction, Nighttime Birds and Morning Stars is a radical departure from the sort of music that informed Henson’s earlier releases. From another, it is a continuation of the maverick spirit that animated that music in the first place. —ANDY CUSH

A harpist, vocalist, and electronic sound artist, Sage Fisher has been recording in and around Portland’s underground music scene for the past decade. Initially experimenting with avant-folk under the name Nadine Mooney, she arrived at her Dolphin Midwives project in 2015. As Dolphin Midwives, Fisher makes music that can be difficult to pin down, with significant instrumental and compositional variations from piece to piece. Recursive, minimal harp melodies give structure to Fisher’s new album, Liminal Garden, but don’t define it; in intricate production, layers of electronic distortion mount a near-constant attack on the music’s more acoustic components. The result is starkly beautiful, with cracked electroacoustic reconfigurations of the harp at the center of it all.

If there’s a governing impulse here, it’s twofold, and seemingly in conflict with itself. Caught between Fisher’s creative and destructive impulses, Liminal Garden is an experiment in deconstructing sound. Few notes, plucked or sung, remain unaltered. The opener, “Grass Grow,” suspends ghostly vocals over a stuttering ambient soundscape, with no initial trace of harp. But rather than aiming for vocal purity in the vein of Grouper or Julianna Barwick, Fisher manipulates a lone, formless voice into a kind of phrasal patchwork. Vocals begin mid-note, or peter out unexpectedly. Long tones sound as if they’re played in reverse, or blended together electronically. A delicate assemblage of broken fragments are stitched into a single melismatic cry, sustained for almost four and a half minutes. “It’s representative of how I think, and mirrors what happens to a brain during trauma,” says Fisher in an interview with Portland Mercury. “You just kind of stop and things can go blank for a second, or you re-remember at a different time. Things get pieced together and chopped up.”

Liminal Garden also works as a showcase for Fisher’s extreme technical proficiency, both on the harp and in the digital audio workstation. Passages where the harp is drawn out of the mix and into the foreground, as at the start of “Junglespell” and “Castleshell,” make for some of the album’s calmest moments. Those two tracks follow a similar logic, in that their opening harp melodies are eventually overtaken by waves of electronic distortion. In both cases, the purity of those opening notes is disrupted, giving way to dizzying crescendos and an aggressively warped low-end. A distinct new age influence runs through much of the album, but never overpowers Fisher’s unique vision. Toward the end of “Satya Yuga,” a creeping tonal darkness casts as shadow of anxiety over an otherwise blissful tableau.

Fisher has characterized these moments as expressions of trauma: a process of grappling with the often painful experience of simply being in the world. Says Fisher in a statement: “It’s about integration, of all of my selves, of the natural world and technology, of all of the brokenness and imperfection and insecurity and fragility of being femme in a patriarchal society.” It’s music that refuses to settle, or to resolve itself. A constellation of fragments, Liminal Gardens affirms its brokenness as more than an intuition. —WILL GOTTSEGEN

Left Field: Mica Levi on Making Music Sound Like a Mushroom Trip in Her ‘Monos’ Score

Left Field: Fennesz on Making His Most Ambitious Album Yet, Plus Blissful Ambient, Loopy Math Rock, and More