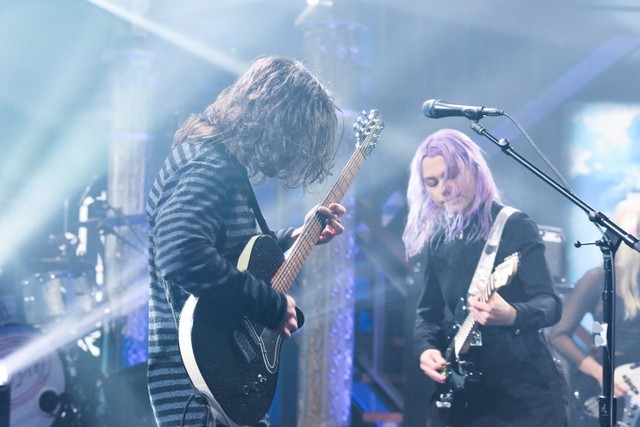 Back in January, Phoebe Bridgers teamed with Conor Oberst to release a surprise self-titled album as Better Oblivion Community Center. Since then, the duo have performed on Late Night with Stephen Colbert and CBS This Morning, and just recently embarked on a tour that’s set to run through mid-May. Fans have shared footage of Better Oblivion Community Center’s March 9 show in Las Vegas, featuring the band’s cover of the Killers’ classic track “Human.”

Somehow, the song is a perfect fit for Bridgers and Oberst. Transforming the original pop arrangement into a kind of spectral duet, they manage to capture all the magic of the Killers’ recording in a much subtler form. Singing “I’m on my knees” for the last time, a typically melodramatic Oberst actually drops to his knees. Commenting on the performance, Bridgers wrote on Twitter: “I think 14 year old me cast a serious fucking spell.”

“Humans” isn’t the only notable cover to find its way into the Better Oblivion Community Center set. On the tour’s first stop at Tuscon, AZ’s Rialto Theatre, Bridgers and Oberst performed a cover of The Replacements’ 1987 track “Can’t Hardly Wait.”

Watch a video from the Las Vegas performance below.