Weezer Are Already Working on Two More New Albums, One Riff-Heavy and One Inspired by Nilsson Sings Newman 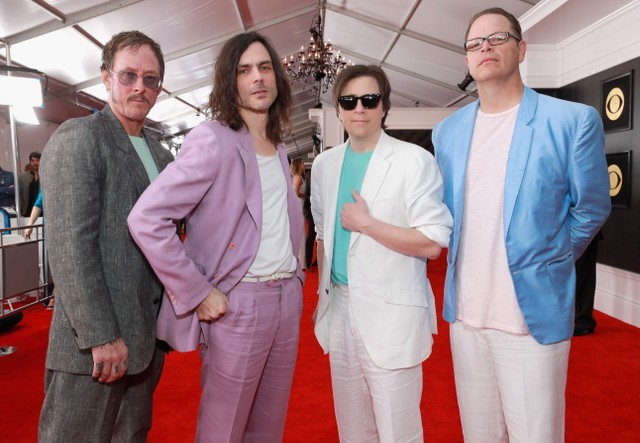 Rivers Cuomo has stayed busy since the success of Weezer’s cover of Toto’s “Africa.” Weezer followed the unexpected hit with a collection of covers dubbed The Teal Album. In a few days, they’ll release their much-anticipated self-titled record, also known as The Black Album. And, according to Cuomo’s new interview with Entertainment Weekly, they’re already working on two more albums.

“What I’ve been working on the last two weeks is back to big guitars. Blue Album-ish, but a little more riffy. The working title is Van Weezer,” Cuomo tells EW. “The inspiration came from our live shows, where, in the middle of ‘Beverly Hills,’ unlike on the album, everything stops and I just break out with this crazy guitar solo. We noticed that, recently, the crowd just goes crazy when I do that. So it feels like maybe the audience is ready for some shredding again.”

He continues, “Van Weezer is in mortal combat with Okay Human, a record that’s mostly done. That one’s totally different. It’s inspired by an album from 1970 called Nilsson Sings Newman. It’s all piano-based, but it has a ton of orchestration. We just did the strings at Abbey Road. It’s just gorgeous melodies and extremely eccentric lyrics.”

Elsewhere in the interview, Cuomo reflects on Weezer’s “Africa” cover far surpassing 2017’s Pacific Daydream on the charts: “The one thing I wasn’t prepared for was the pain of success, and by that I mean the pain of having huge success with a song [laughs] I didn’t write. So, yeah, that really has thrown me. And it’s taken me awhile to regain my faith.”