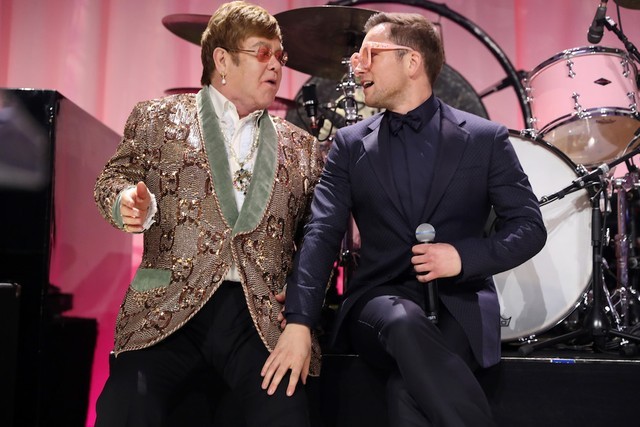 Last night’s Oscars ceremony reminded us of a good many things that we already know, and one of those things was this: The Academy Of Motion Picture Arts & Sciences just loves biopics about iconic musicians. Last night, we saw Rami Malek win Best Actor for playing Freddie Mercury in Bohemian Rhapsody. This summer, Taron Egerton, who sang an Elton John song in Sing and co-starred with Elton John in Kingsman: The Golden Circle, will play Elton John in the new biopic Rocketman. Dexter Fletcher — the man who took over Bohemian Rhapsody when director Bryan Singer was fired in the middle of production — helms Rocketman. And last night, at Elton John’s Oscar party, he and Egerton sang together. Maybe they were rehearsing for next year.

One thing about Rocketman: Egerton does not lip-sync in the movie, the way Rami Malek did in Bohemian Rhapsody. Instead, he sings those Elton John songs for real. That’s always a double-edged sword in musician biopics, since you can’t expect actors to have the exact same voices as iconic singers, but you can also totally tell when they’re just twiddling their lips. But last night, Egerton at least showed that he’s a strong mimic and that he’s got a nice chemistry with Elton John himself.

With Egerton on lead vocals and Elton John on piano, the pair sang “Tiny Dancer” together, and Egerton did a pretty nice job approximating Elton John’s own tour. And they sure seemed to like performing together. This thing is going to make so much money, isn’t it? Watch the performance below, via NME.

Rocketman is in theaters 5/31.