Thirteen years after their last studio album, The Who are back with a new full-length project and a lengthy North American tour. Details about the new record are sparse, but according to Pete Townshend, fans can anticipate “dark ballads, heavy rock stuff, experimental electronica, sampled stuff and Who-ish tunes that began with a guitar that goes yanga-dang.” Expect it later before the end of 2019.

The “Moving On!” tour is set to kick off on May 7 in Grand Rapids, Michigan at the Van Andel Arena, and is being billed as an orchestral endeavor. Roger Daltrey issued this statement to reassure fans it’ll still be a high-energy show: “Be aware Who fans! That just because it’s the Who with an orchestra, in no way will it compromise the way Pete and I deliver our music. This will be full throttle Who with horns and bells on.”

Find the full list of tour dates below, and stayed tuned for the “yanga-dang” later this year. 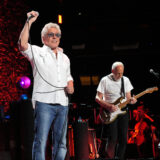 pete townshend, roger daltrey, the who