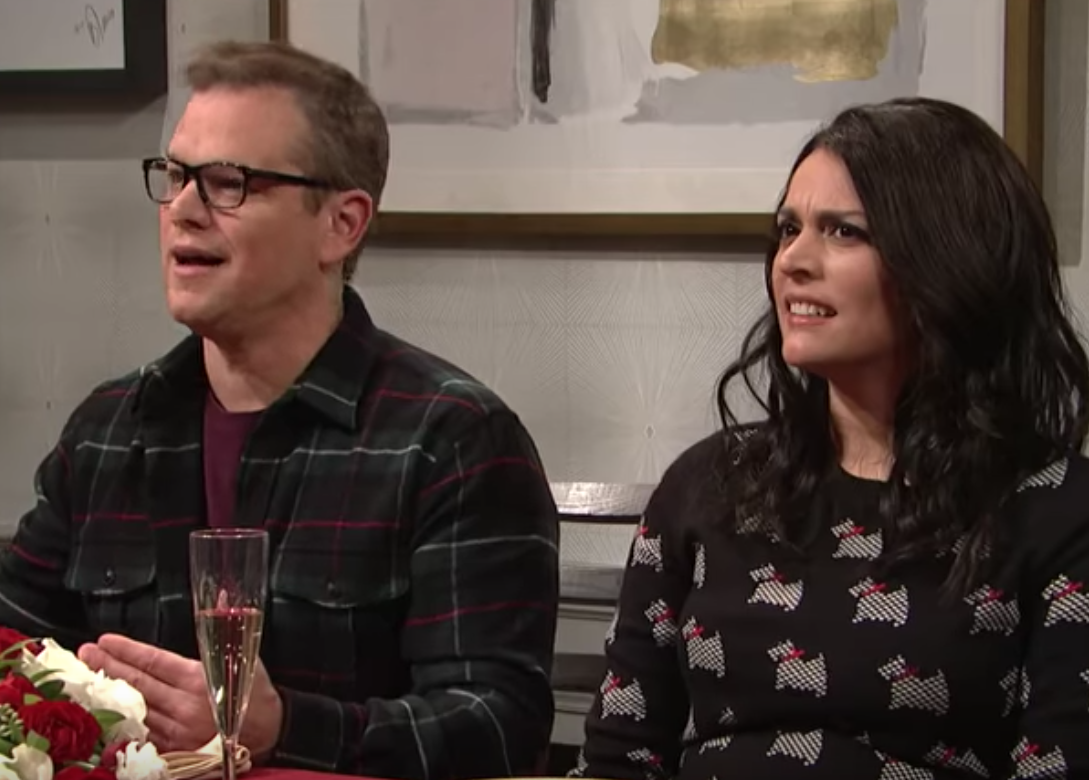 Matt Damon was the host of last night’s Saturday Night Live, where he took part in a handful of holiday skits like the show’s “It’s a Wonderful Trump” cold open. In one sketch, Damon sat down for Christmas dinner with his new neighbors Kenan Thompson and Leslie Jones. Just as the neighbors are getting to know each other, Weezer’s recent chart-topping cover of Toto’s “Africa” comes on in the background as Damon and Jones get into a heated argument about whether the band is still any good.

“I think they’re doing some cool things right now,” Damon says of his support for Weezer, noting that they’ve just announced the release date for “the freaking Black Album.” “I’m just a little confused because real Weezer fans know they haven’t released a good album since Pinkerton in ’96,” Jones responded. “Weezer put out two perfect albums, Blue and Pinkerton, and the rest is pretty corny.”

The argument edges closer and closer to a physical confrontation before Damon ultimately storms out the house, quoting the band’s 2005 hit “Beverly Hills” with his exit. Though the band hasn’t formally responded to the sketch, drummer Patrick Wilson wrote “Go Matt Damon!” this morning on Twitter. Elsewhere in the episode, Miley Cyrus, Mark Ronson, and Sean Ono Lennon performed as the show’s musical guests. Watch Matt Damon’s Weezer sketch below.

Update (2:45pm EST): Weezer frontman Rivers Cuomo took to Twitter to voice his support for the SNL sketch, writing that he’s “ACTUALLY CRYING AAAGGGGHHHHHHH.” Check out the tweet below.