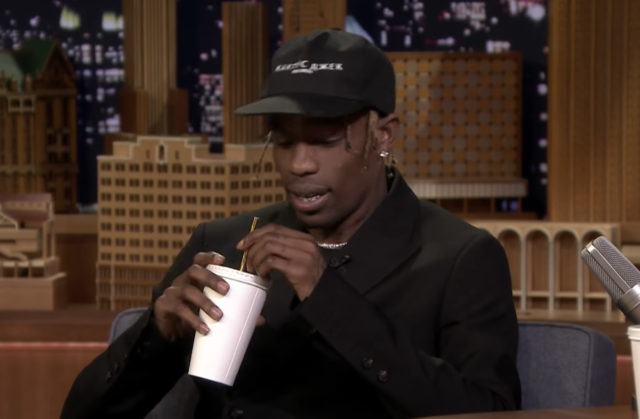 Travis Scott was the guest on last night’s episode of The Tonight Show Staring Jimmy Fallon, where he discussed his upcoming musical performance on SNL tonight, as well as his high school theater experience and the origins of his stage name, since his real name isn’t actually Travis Scott.

In the interview, Fallon asked about the two Jamba Juice lines on his Astroworld hit “Sicko Mode.” In the song, Scott raps, “LaFerrari to Jamba Juice, yeah (skrrt, skrrt)” and later, “Just landed in Chase B mix this pop like Jamba Juice.” Fallon of course then tested Scott’s Jamba Juice expertise, quizzing him on the shop’s flavors with three cups of mystery juice. Scott is surprisingly exceptionally talented at identifying Jamba Juice flavors, correctly identifying every flavor given to him, including a cup featuring a combination of two juices.

Scott recently announced that he’d be performing at a benefit concert for the late Mac Miller, who died  of an apparent overdose last month at age 26. Scott also paid tribute to Miller at a recent concert in Las Vegas. He recently made an appearance on the new Juicy J song “Neighbor.” His latest album Astroworld was released in August. Watch clips of his Fallon appearance below.