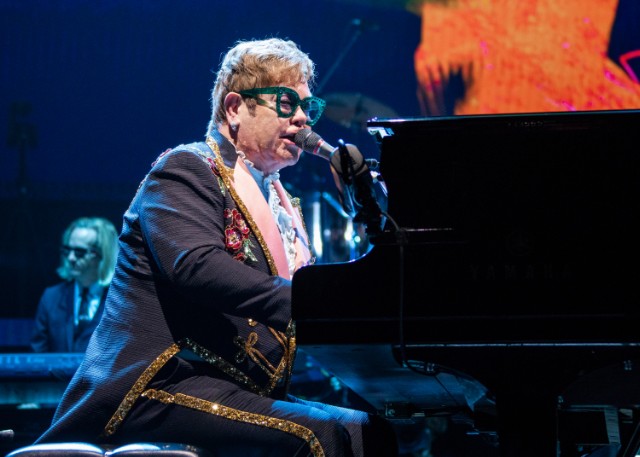 Elton John used his appearance in the late Aretha Franklin’s home town to pay a warm tribute to her — and highlight something special she did for John and his songwriting partner, Bernie Taupin.

Introducing “Border Song” from his self-titled 1970 sophomore album on Friday night (Oct. 12), John told the crowd at Detroit’s Little Caesars Arena about being told by his song publisher that somebody had covered it.

“We asked who. They said Aretha Franklin,” John recalled. “Can you imagine two young writers, white boys from England…We were gobsmacked. In fact, we nearly pissed our pants in sheer delight at the fact the woman we loved so much then and grew to love even more afterward would actually record one of our songs.”

Franklin recorded “Border Song” for her Young, Gifted and Black album in 1972, billing it as “Border Song (Holy Moses).” Franklin’s version hit No. 37 on the Billboard Hot 100, 55 points higher than John’s original recording.

John also told Friday’s crowd that he and Franklin eventually became friends who happened to share the same birthday (March 25). “I loved her so much,” he said. “I used to call her on her birthday sometimes and wish her a happy birthday, to say thank you — not just for being Aretha, but for every piece of music she made that inspired me.”

The video accompanying “Border Song” also featured a photo of Franklin along with other iconic figures.

The concert was part of John’s Farewell Yellow Brick Road tour, which spends a second night in Detroit on Saturday (Oct. 13). John dedicated the latest episode of his “Rocket Hour” Apple Music Beats 1 show, airing at noon Saturday, to Detroit, playing music by Franklin, Bob Seger and others and interviewing Eminem.