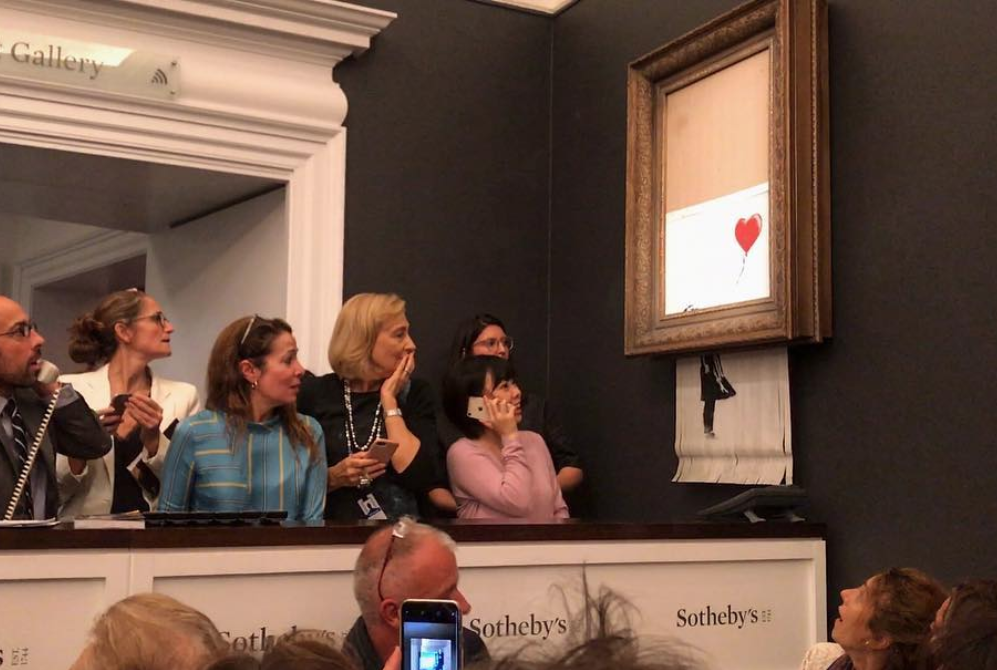 English visual artist Banksy pulled one of the biggest stunts of his career Friday night at a Sotheby’s auction in London. A framed version of the artist’s well-known piece “Girl With Balloon” was the final item up for auction that night, and moments after the piece went for $1.4 million—a sum equal to previous pieces sold at auction—an alarm installed within the painting sounded and the piece slipped through a shredder built into its frame.

“It appears we just got Banksy-ed,” Sotheby’s senior director and head of contemporary art in Europe Alex Branczik shared with the Guardian. In a statement, Sotheby’s said that they’ve spoken with the “successful purchaser,” who declined to reveal their identity publicly.

“The unexpected incident became instant art world history and certainly marks the first time in auction history that a work of art automatically shredded itself after coming under the hammer,” the statement continues. “We have talked with the successful purchaser who was surprised by the story. We are in discussion about next steps.”

Banksy himself apparently caught the entire thing on video as well. On Instagram, the anonymous artist posted a video of the auction, as well as a photo captioned “Going, going, gone…” The video provides more context about how the shredder was made, but in true Banksy fashion, did little to explain his intent.

“Given the media attention this stunt has received, the lucky buyer would see a great return on the [$1.4 million] they paid last night,” popular Banksy resell site MyArtBroker told the Guardian. “This is now a part of art history in its shredded state and we’d estimate Banksy has added at a minimum 50% to its value, possibly as high as being worth £2m plus.”

See photos and video of the stunt below.

. “The urge to destroy is also a creative urge” – Picasso