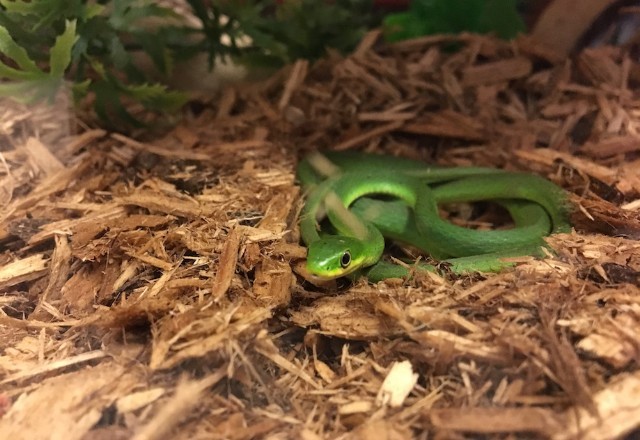 A few weeks ago, some guys arrived at Spin’s office carrying a terrarium. Inside was Digits, a live animal with the appearance and dispensation of a neon green shoestring. She was a tiny, adorable, mostly sedentary snake, sent courtesy of Young Thug to our colleagues at Billboard, in the service of promoting his then-new record Slime Language. We were skeptical at first. Is it unethical to foist an animal that requires care on a party that isn’t necessarily prepared or willing to care for it? What is the connection between the album and this precious creature now inhabiting our workspace, who isn’t even slimy anyway? A snake makes a better pet than a slug, we figured, and moved on with our lives. Some of us, perhaps, even grew to love her.

Digits wasn’t the only Young Thug snake that went out to a publication that week. Previously, we checked in with new reptile owners at Mass Appeal (whose snake was named Freaky), the Fader (whose snake arrived bearing no name tag), Pitchfork (they sent theirs back), and NPR (same). Basically everyone was feeling cautiously optimistic if a little weirded out about their new pets. Now, we can report that at least several of the snakes are still alive and healthy.

“Freaky shed a few days ago and we are now raising crickets in the office,” said Kyle Petreycik of Mass Appeal. The crickets are food, and they live in their own separate terrarium, where they are sustained by “orange ‘feeding cubes’ and a wet sponge,” Petreycik explained. Such details are surely known to seasoned snake caretakers, but for me, hearing about cricket colony was a mild surprise. If there are crickets at Mass Appeal, there are probably crickets where I work. I’d rather not think about it.

Moving on. The Fader’s snake has a name now: Dizzy. It found its forever home in the apartment of Nazuk Kochhar, the magazine’s style editor. Kochhar feeds Dizzy a few large crickets a week, and says that the snake situation in general is “pretty chill.” “I have a video of her dancing around under the heat lamp that was provided by the snake people,” she said. “She’s cool and happy, though lately she’s just been laying around.” Kochhar was particularly impressed by the supplies that Young Thug’s people included along with the snake, which essentially covered everything but cricket refills. And “crickets are like eleven cents per large cricket,” which is pretty chill indeed.

We’d originally heard that Complex got a snake, but apparently it was addressed specifically to DJ Akademiks, the shit-stirring cohost of the publication’s Everyday Struggle talk show. Word is the snake is now in Ak’s care. He initially seemed interested when we reached out to him to have a conversation about it, but has since stopped responding. We’re sure they’re having lively conversation together.

As for Digits, she’s holding up well, living in the office of Ross Scarano, Billboard’s VP of Content. “She’s been a little elusive today. But I think she’s definitely acclimated to the number of people who come in and out of the office,” he said. Apparently Digits isn’t eating very much, which has led some of our coworkers to wonder whether she’s depressed. Scarano points out that the snake delivery guys mentioned she might not have a big appetite as she acclimates to her new environment, but admits that the food issue is still a “gray area.” Cheer up, Digits! I take back everything I said about you seeming like a shoelace.

We were curious about what became of the snakes that publications sent back, so we reached out to 300 Entertainment, Thug’s label, to ask about it. So far, we haven’t heard anything. Hopefully there are lots of crickets wherever they are.

Update (3:35 p.m.): Since publishing this story, we’ve learned that Noisey’s former snake Hubby now resides in the office of the music PR agency Girlie Action, which provided us with an extremely cute photo of its little head peeking out from some wood chips.