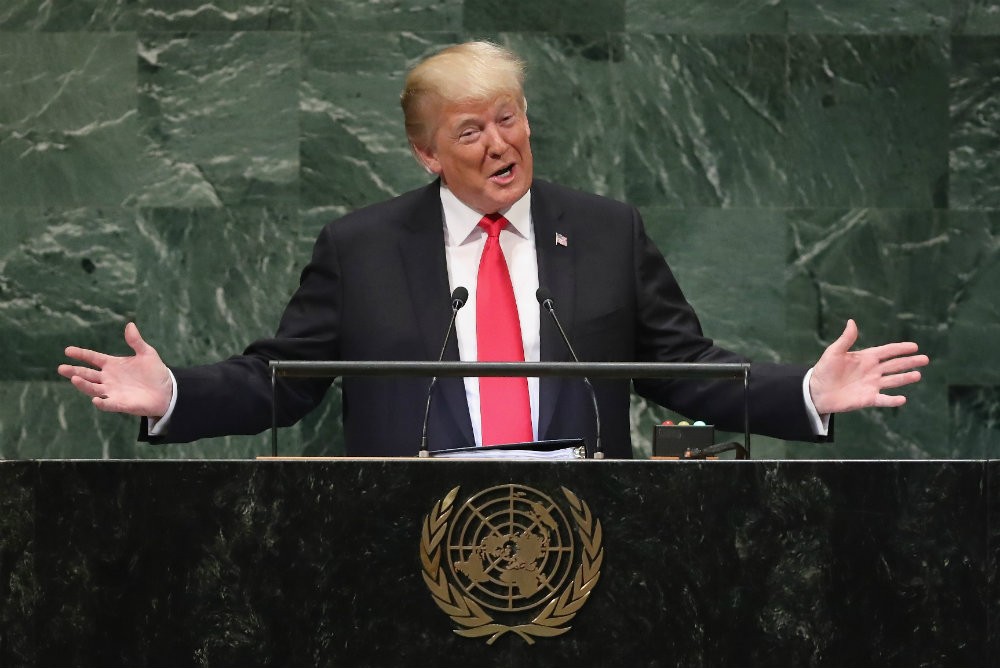 President Trump addressed the UN General Assembly in New York City on Tuesday. In some respects, it was an improvement from last year’s address where he threatened to bomb North Korea off the map. Although Trump kept his rage relatively in check this time around, he was still met with derision and even laughter as he slurred his words, inflated his administration’s accomplishments, and made statements that were not grounded in reality.

What should have been the most devastating moment for Trump was when his boast about his administration’s accomplishments prompted a laugh break. He seemed to be a good sport about it, though.

The president followed up with “Didn’t expect that reaction, but that’s okay,” prompting more laughter, and some applause.

#UNGA. Laughs. At the U.S. President.pic.twitter.com/AZblLx5WLD

The German diplomats got a kick out of this portion of the speech, but it’s hard to tell if they’re reacting to the actual substance of what Trump is saying, or if they are chuckling over the president’s failed attempts at pronouncing the word “expansionist.”

Trump mangles the word “expansionist.” The German diplomats appear to be mocking him. pic.twitter.com/UNsgXDbVoD

Trump didn’t fair much better with the phrase “human smuggling” as he delved into the hardline anti-immigration portion of his overly nationalistic address.

Trump concluded his anti-immigration screed by positing that perhaps people will stop fleeing to the United States if they had better living conditions in their own countries. He’s not wrong and it almost sounds as if he’s skating on the edge of a breakthrough.

“Ultimately, the only long-term solution to the migration crisis is to help people build more hopeful futures in their home countries,” Trump said. “Make their countries great again.”

Trump transitioned from that to a condemnation of socialism and “the misery it brings to everyone.” As if on cue, the Swedish diplomats start shifting in their seats and making the faces infants make after sucking on a lemon.

GIVE THIS DIRECTOR AN EMMY AWARD pic.twitter.com/soAOFEdatB

Trump being a huge dumbass seems to be the one thing the world can agree on. Watch his full speech below.