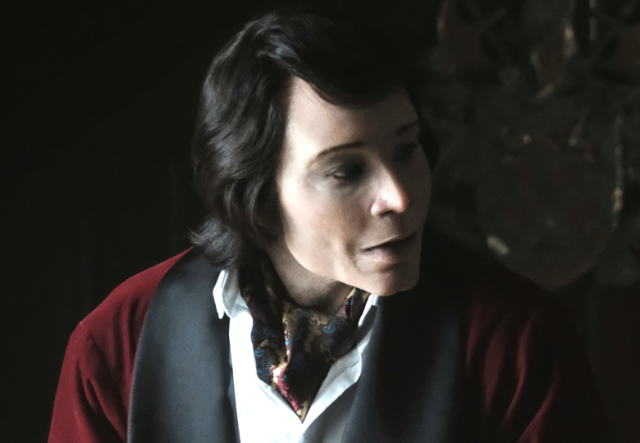 Donald Glover’s FX TV series Atlanta is nominated for 16 awards at tonight’s Emmys including Outstanding Directing for a Comedy Series, Outstanding Casting for a Comedy Series, Outstanding Single-Camera Production Design for a Narrative Program, and more. The episode up for five of those awards, “Teddy Perkins,” follows the mysterious character of the episode’s namesake as he meets Darius (Lakeith Stanfield) to pick up a free piano. Tonight at the Emmys, Teddy Perkins briefly stopped by the ceremony, appearing on broadcast in the exact same seat as Donald Glover.

While Donald Glover played the character in whiteface for the episode, no one’s quite sure who’s in costume at tonight’s Emmys. Later in the broadcast, Glover could be spotted back in his seat without any makeup.

Earlier this year, Derrick Haywood (who plays Teddy’s brother Benny Hope) said that even on the set, he had absolutely no idea that Perkins was actually Glover in whiteface. See photos of the character’s appearance at tonight’s Emmys below.

Hi. how we doin pic.twitter.com/oHuqtoDlb0