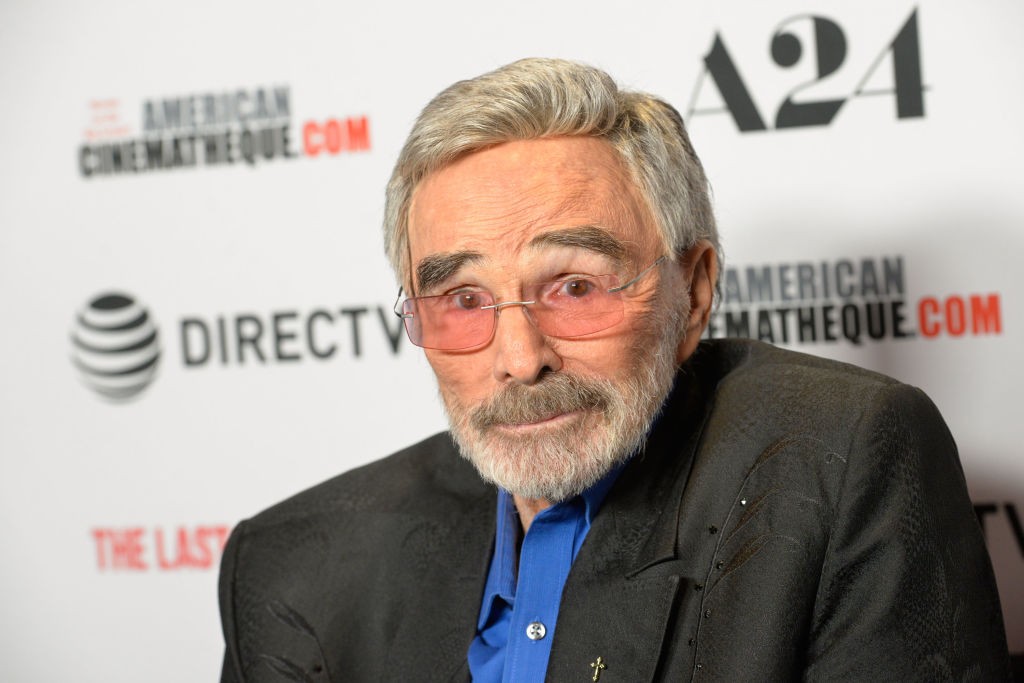 Burt Reynolds, the charismatic star of such films as Deliverance, The Longest Yard and Smokey and the Bandit who set out to have as much fun as possible on and off the screen — and wildly succeeded — has died. He was 82.

Always with a wink, Reynolds shined in many action films (often doing his own stunts) and in such romantic comedies as Starting Over (1979) opposite Jill Clayburgh and Candice Bergen; The Best Little Whorehouse in Texas (1982) with Dolly Parton; Best Friends (1982) with Goldie Hawn; and, quite aptly, The Man Who Loved Women (1983) with Julie Andrews.

Though beloved by audiences for his brand of frivolous, good-ol’-boy fare, the playful Reynolds rarely was embraced by the critics. The first time he saw himself in Boogie Nights, he was so unhappy he fired his agent. (He went on to win a Golden Globe but lost out in the Oscar supporting actor race to Robin Williams for Good Will Hunting, a bitter disappointment for him.)

“I didn’t open myself to new writers or risky parts because I wasn’t interested in challenging myself as an actor. I was interested in having a good time,” Reynolds recalled in his 2015 memoir, But Enough About Me. “As a result, I missed a lot of opportunities to show I could play serious roles. By the time I finally woke up and tried to get it right, nobody would give me a chance.”

Still, Reynolds had nothing to apologize for. He was Hollywood’s top-grossing star every year from 1978 through 1982, equaling the longest stretch the business had seen since the days of Bing Crosby in the 1940s. In 1978, he had four movies playing in theaters at the same time.

Reynolds’ career also is marked by the movies he didn’t make. Harrison Ford, Jack Nicholson and Bruce Willis surely were grateful after he turned down the roles of Han Solo, retired astronaut Garrett Breedlove and cop John McClane in Star Wars, Terms of Endearment and Die Hard, respectively. He often said that passing on James L. Brooks’ Endearment was one of his worst career mistakes. (Nicholson won an Oscar for playing Breedlove.)

Reynolds also indicated he was Milos Forman’s first choice to play R.P. McMurphy (another Nicholson Oscar-winning turn) in One Flew Over the Cuckoo’s Nest, “backed away” from playing Batman on TV in the 1960s and declined the part made famous by Richard Gere in Pretty Woman.

In John Boorman’s Deliverance (1972), based on a book by James Dickey, Reynolds starred as macho survivalist Lewis Medlock, one of four guys from Atlanta who head to the wilderness for the weekend. Filmed by Vilmos Zsigmond along the Chattooga River near the Georgia-South Carolina border, it was an arduous production that Boorman shot in sequence.

“When I asked John why, he said, ‘In case one of you drowns,’ ” Reynolds wrote.

He had good reason. When Reynolds saw test footage of a dummy in a canoe going over the falls in one scene, he told Boorman the scene looked fake. He climbed into the canoe, was sent crashing into the rocks and ended up in the hospital. “I asked [Boorman] how [the new footage] looked, and he said, ‘Like a dummy going over the falls,’ ” Reynolds wrote.

Deliverance, infamous for its uncut 10-minute hillbilly male rape scene (“squeal like a pig”), was nominated for three Academy Awards but came away empty. It lost out to The Godfather in the best picture battle.

“If I had to put only one of my movies in a time capsule, it would be Deliverance,” Reynolds wrote. “I don’t know if it’s the best acting I’ve done, but it’s the best movie I’ve ever been in. It proved I could act, not only to the public but me.”

Three months before the movie opened, Reynolds — once described by journalist Scott Tobias as the “standard of hirsute masculinity” — showed off his mustache and other assets when he posed nude on a bearskin rug for a Cosmopolitan centerfold in April 1972. (Seven years later, he would become the rare man to grace the cover of Playboy.)

The Cosmo issue sold an outlandish 1.5 million copies. “It’s been called one of the greatest publicity stunts of all time, but it was one of the biggest mistakes I’ve ever made,” he wrote, “and I’m convinced it cost Deliverance the recognition it deserved.”

A running back in high school and college who talked with legendary coach Bear Bryant about attending Alabama, Reynolds put his gridiron skills to use in Robert Aldrich’s The Longest Yard(1974), playing Paul “Wrecking” Crewe, who leads his rag-tag team of prison inmates in a game against the guards. He later starred in Semi-Tough (1977), another football film.

Smokey and the Bandit (1977), written and directed by his pal, the legendary stuntman Hal Needham, grossed $126 million (that’s $508 million today, and only Star Wars took in more that year). Reynolds, who stars as Bo “Bandit” Darville, hired to transport 400 cases of Coors from Texas to Atlanta in 28 hours, noted that, unbelievable as it sounds, Smokey was Alfred Hitchcock’s favorite movie.

Reynolds drives a sleek Pontiac Trans-Am in the film, and after the picture opened, sales of the model soared. (His black car is mentioned in Bruce Springsteen’s “Cadillac Ranch,” and the Tampa Bay Bandits, a U.S. Football League team in which he had an ownership stake, were named for the movie.)

Smokey spawned two sequels, and Reynolds went on to work again with Needham in The Cannonball Run (1981), another fun-filled action film that spawned another franchise. His other high-octane films included Sharky’s Machine (1981) and two movies as ex-con Gator McClusky.

In Smokey, Reynolds starred alongside Sally Field, and the two were an item for some time. He also had relationships with the likes of Dinah Shore (20 years his senior), Inger Stevens and Chris Evert, and he talked about dating Hawn and Farrah Fawcett in his book.

Reynolds was married to British actress Judy Carne (famous for NBC’s Rowan & Martin’s Laugh-In) from 1963-66 and then to Loni Anderson, the voluptuous blonde best known for the CBS sitcom WKRP in Cincinnati, from 1988-93. Both marriages were tempestuous, and his divorce with Anderson was particularly messy.

After a string of big-screen failures and the cancellation of his ABC private detective series B.L. Stryker, Reynolds rejuvenated his career by starring in the 1990-94 CBS sitcom Evening Shade, created by Harry Thomason and Linda Bloodworth-Thomason.

He won an Emmy Award in 1991 for best actor in a comedy series for playing Woodrow “Wood” Newton, a former Pittsburgh Steelers quarterback who returns to his small-town home in Arkansas to coach a woeful high school team.

Burton Milo Reynolds Jr. was born on Feb. 11, 1936, in Waycross, Ga., and raised in Florida’s Palm Beach County. His father was an Army veteran who became the police chief in Riviera Beach, Fla., not too far from the Everglades.

“My dad was my hero, but he never acknowledged any of my achievements,” he wrote in his memoir. “I always felt that no amount of success would make me a man in his eyes.”

Then known as Buddy Reynolds, he played halfback at Palm Beach High School, where his teammate was future New York Yankees manager Dick Howser, then suited up at Florida State, where Lee Corso, later a college coach and ESPN analyst, played on both sides of the ball. But he suffered a knee injury as a sophomore, and that was it for football and Florida State.

Reynolds enrolled at Palm Beach Junior College and appeared in a production of Outward Bound, playing the part handled by John Garfield in the 1944 film adaptation, Between Two Worlds. That led to a scholarship and a summer-stock stint at the Hype Park Playhouse in New York. He roomed with another aspiring actor, Rip Torn, and they studied at the Actors Studio.

After a few appearances on Broadway and on television, Reynolds was off to Hollywood, where he signed with Universal and manned the wheel as Ben Frazer on Riverboat, an NBC Western that starred Darren McGavin.

He met Needham on that show, and the stuntman would double for him on projects through the years. Reynolds is referenced in “The Unknown Stuntman,” the theme song from the 1980s ABC series The Fall Guy, and he played an aging stuntman in Needham’s second film, Hooper (1978).

Reynolds joined Gunsmoke for its eighth season in 1962 as Quint Asper, a half-Comanche who becomes the Dodge City blacksmith. He played the title warrior in the 1966 spaghetti Western Navajo Joe, was an Iroquois who worked as a New York City detective in the short-lived ABC series Hawk and portrayed a Mexican revolutionary in 100 Rifles (1969).

Reynolds got another shot at toplining his own ABC show, playing homicide detective Dan August in a 1970-71 Quinn Martin production, but the series was axed after a season.

Reynolds appeared often on NBC’s The Tonight Show, and in 1972 he became the first non-comedian to sit in for Johnny Carson as guest host (Reynolds’ first guest that night was his ex-wife, Carne; they hadn’t spoken in six years, and she made a crack about his older girlfriend Shore). He and Carson once engaged in a wild and improvised whip-cream fight during a taping, and he got to show a side of him the public never knew.

“Before I met Johnny, I’d played a bunch of angry guys in a series of forgettable action movies, and people didn’t know I had a sense of humor,” he wrote. “My appearances on The Tonight Show changed that. My public image went from a constipated actor who never took a chance to a cocky, wisecracking character.”

Reynolds showed that lighter side when he played a sperm in Woody Allen’s Everything You Always Wanted to Know About Sex (1972), and he lampooned his lavish Hollywood lifestyle in Mel Brooks’ Silent Movie (1976). He was not above making fun of himself and his toupee.

In 1979, he opened the Burt Reynolds Dinner Theatre in Jupiter and in the 1980s, he developed the syndicated game show Win, Lose or Draw with host Bert Convy. The set was modeled after his living room.

With his divorce from Anderson and bad restaurant investments contributing to more than $10 million in debts, Reynolds filed for Chapter 11 bankruptcy protection in 1996 and came out of it two years later. In recent years, he sold properties in Florida, including his fabled 160-acre ranch — the Allman Brothers recorded an album there in the 1990s — and auctioned off personal belongings.

Survivors include his son, Quinton; he and Anderson adopted him when he was 3 days old.

Despite the ups and downs of a Hollywood life, Reynolds seemed to have no regrets.

“I always wanted to experience everything and go down swinging,” he wrote in the final paragraph of his memoir. “Well, so far, so good. I know I’m old, but I feel young. And there’s one thing they can never take away: Nobody had more fun than I did.”