Here’s a funny story about Journey. Excuse me, here’s a funny story about Neal Schon, Journey’s guitarist and sole founding member, despite what you might read in quasi-journalistic publications that disparage him with such demeaning terms as “co-founder.” It is Neal Schon himself, and not any of his Journey bandmates, who is the subject of this blog post, and we would not want to mislead you into thinking otherwise.

Schon, you see, has a hilarious habit of contacting journalists—either through his publicist or directly himself—to inform them that their reporting is incorrect when they don’t adequately center his role in the band. The latest example came this week, after Tampa Bay Times music critic Jay Cridlin wrote a largely positive concert review about Journey’s tour stop in his city over the weekend. Here’s what Cridlin wrote about a section of the show that paid tribute to the late Aretha Franklin:

“(Schon) took several extended solos during the show, meandering and mugging it up as his fingers flicked across the fretboard. He put some honest-to-goodness heart behind the last one, just before Wheel In the Sky, as the band scrolled photos of the late Aretha Franklin on the screen behind him.”

And here’s the email Cridlin later received from Schon himself, which Cridlin published in a cheeky follow-up piece on the Times website: 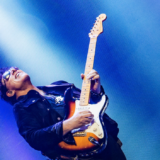 “The correct way to say (it is) Journey’s Neal Schon did the tribute to Aretha Franklin,” Schon wrote in an email Monday. “That would be honest journalism of what it was and is.”

Schon’s publicist elaborated in an earlier email to Cridlin:

Read the sentences from the review again. Schon is the only member mentioned by name regarding the tribute, and Cridlin makes clear that the photos of Franklin appeared onstage while Schon was playing a solo. But the implication that any other member of the Journey enterprise was at all involved in the tribute—even, say, the technical personnel involved in making the projections happen—was apparently too much for Schon to bear.

This isn’t the first time a writer has gotten such an email from Schon’s camp. I know because I received one myself last year, though I was not fortunate enough to have the supreme axeman himself bestow his direct attention upon me. The email came from his publicist, after I’d published a very silly piece based on Schon’s evident displeasure with his bandmates for making a formal visit to the Donald Trump White House. (Schon did not attend.)

I made the mistake of referring to Schon as “Journey guitarist and co-founder” in that piece, and soon received an email that might as well have come from Kim Jon-il’s publicity shop:

I handle press for Neal Schon of Journey and I need you to make a correction to this story: https://spin.com/2017/08/journey-donald-trump-tension

You referred to Neal Schon as the co-founder of Journey. Neal is the sole founder of the band, and members were wrapped around him to create the band when they started. I need you to change “co-founder” to “founder”.

Please email me as soon as you’ve made this change.

This question of who founded Journey seems to be a particular sticking point for Schon, who also emailed Cridlin with some philosophical observations on the nature of “founding.” Cridlin had identified Ross Valory—who was Journey’s first bass player and has songwriting credits on their debut album—as the band’s “founding bassist.” “I myself started the band with ex-manager Herbie Herbert,” Schon wrote. “Everyone else came afterwards including Ross Valory. You can’t rewrite history man. It is what it is.”

Some quick Googling suggests that there may be other similar incidents. A 2017 Orange County Register concert review, for instance, comes with the following correction: “An earlier version of this article incorrectly attributed who dedicated the Journey song “Lights” to former singer Steve Perry. Guitarist Neal Schon mentioned Perry from the stage.”

After Cridlin published his follow-up, Schon tweeted “Thanks Jay for the correction. I’m sorry that you really didn’t care for the corrections. They are facts not fiction.” Sometime later, he deleted that tweet, maybe because he realized the offending passages of the review are still there. The horror!