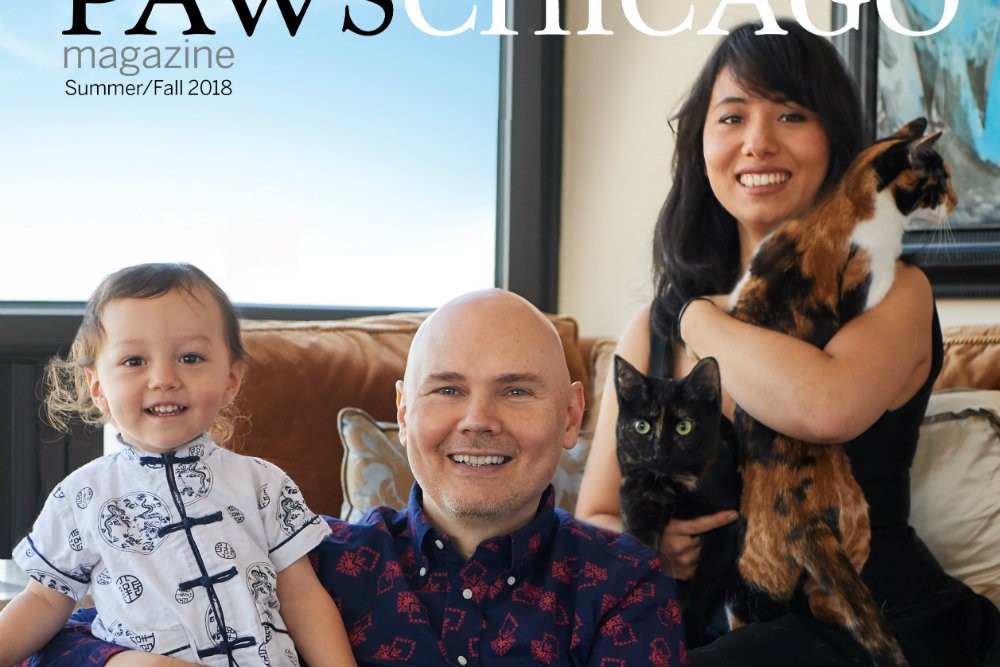 Four years ago, Billy Corgan graced the cover of the no kill shelter PAWS Chicago’s magazine with his two little baby panthers Sammi and Mr. Thom. In a New York Times profile from March, the Smashing Pumpkins frontman promised a return to the PAWS Chicago cover. Now he has finally delivered on that promise, returning to the cover along with a first time appearance from his partner, fashion designer Chloe Mendel, and their son Augustus Juppiter.

Rounding out the cover models are Corgan cats and PAWS Chicago adoptees Angelface and Diamond Baby. Sammi and Mr. Thom have since made the journey to the big windowsill in the sky. Not pictured are Chin Chin and Ling Ling, two Lab-Sharpei dogs that Mendel adopted from a friend.

The PAWS Chicago magazine profile of the Corgan-Mendel family shows how the cats and dogs are every bit a part of the family as Billy and Chloe’s human kid. From PAWS Chicago:

Bringing an infant home to a house full of pets can be a stressful situation for all parties, but Corgan and Mendel managed with both care and ease. “We let Augustus figure out his own relationship with the pets while very closely monitoring any behavior that was over the line regarding their space or well-being,” Corgan said. “He learned with them what was appropriate. But the pets seemed to know he was a baby and were very patient.”

“It’s important to still make time for the pets while allowing them to create their own relationship with the child,” said Mendel. “The pets are fully aware of the new baby in the home. It’s important that they know they are loved and a part of the family and that it is their job to welcome in the new addition as if it were their own.”

Although Sammi and Mr. Thom are lounging around in heaven’s cat condo, Corgan talked fondly about the first time he met the kitties at a PAWS Chicago shelter.

William fell in love with a litter of four stunning sleek black kittens. After they were spayed and neutered, Sammi and Mr. Thom went home with him, while William’s sound engineer, Bjorn Thorsrud, adopted the other two kittens and named them Isis and Darko.

When either William or Bjorn was traveling, the cats would stay at the other person’s home. The siblings acted like strangers each time they met, but by the end of the week, they “would be sleeping together intertwined as if they were kittens again,” William recalled.

Later in the profile, Corgan reminisced about how the standoffish Sammi would intuitively “come and sit on my chest” whenever he was feeling down.

Shiny + Oh So Bright – the Summer/Fall 2018 issue of the PAWS Chicago magazine featuring @SmashingPumpkins @WilliampCorgan and @ChloeMendel is here! Read more about William’s new album and tour and Chloe’s faux fur business that supports homeless animals. Link in bio! Pick up a copy of the new magazine at the Smashing Pumpkins concert in Chicago this Monday and Tuesday. Copies of the newest edition of the magazine will be available in honor boxes in the coming weeks!

Which Smashing Pumpkins Album Is the Best?