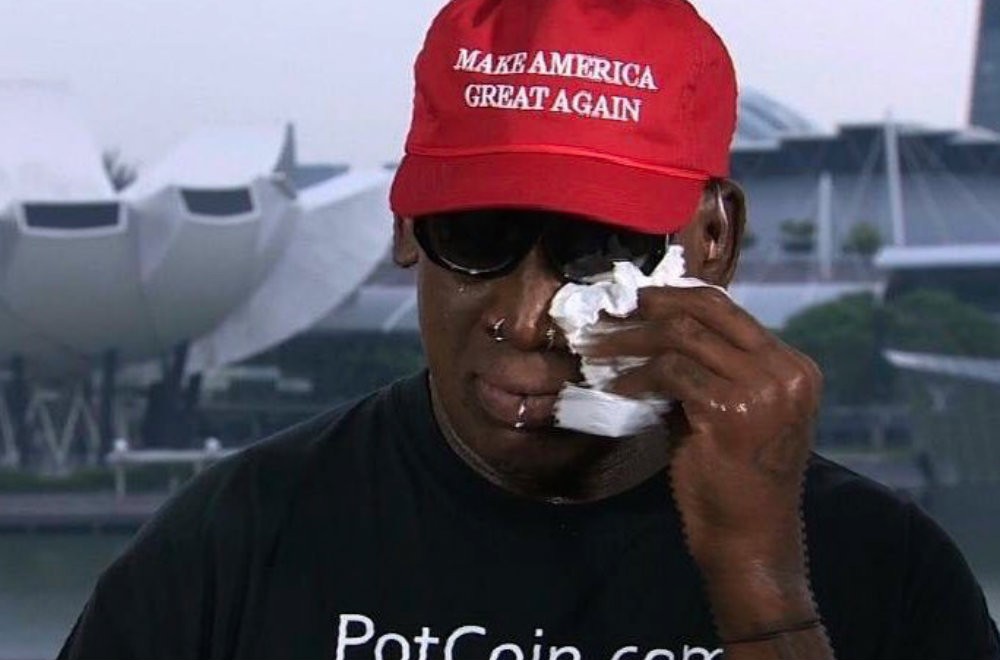 In what is somehow not the craziest thing to happen on Monday night, former basketball player turned cryptocurrency spokesman/unofficial ambassador to North Korea, Dennis Rodman shouted out Eddie Vedder during a weepy interview with CNN’s Chris Cuomo. Rodman, a longtime friend of North Korean dictator Kim Jong Un and a former contestant on Donald Trump’s Celebrity Apprentice, was in Singapore at the invitation of marijuana industry cryptocurrency site PotCoin, despite not being able to actually attend the summit between Kim and President Trump. Just in case you weren’t aware that PotCoin sponsored the trip, Rodman wore their t-shirt with the url prominently displayed in the interview.

Towards the end of the interview, Rodman launched into a list of people he wanted to thank, as if he were accepting an Academy Award.

“I’m thanking Eddie Vedder of Pearl Jam and everybody who supported me through all these things. I’m going to thank my kids. They’re still with me after all these years,” Rodman said before saying the was thankful for his corporate sponsor.

Rodman is longtime friends with the members of Pearl Jam and has been known to appear on stage with the group from time to time. A representative for Pearl Jam said the “band is in Amsterdam kicking off their European tour tonight, so they aren’t reachable for any interviews at the moment.”

You can watch the entire Rodman interview below: