Everything We Know About Ariana Grande’s New Album Sweetener

Ariana Grande is gearing up for the release of her fourth album Sweetener, expected out on August 17. It’s her first full album in two years, following up 2016’s Dangerous Woman, and while we don’t yet have an official track list, Grande has been generous with hints and previews. Here’s everything we know about the new album so far.

Sweetener is Grande’s first release since the Manchester Arena bombing

On May 22, 2017, a bomber detonated an explosive in the lobby of Manchester Arena in Manchester, England just after an Ariana Grande concert. Twenty-two people were killed and more than 500 were injured. In response, Grande first canceled some European concerts, then changed her mind: According to manager Scooter Braun’s recent interview with Time, she decided, “If I don’t do something, these people died in vain.” Grande went on to organize the One Love Manchester benefit concert on June 4, 2017, performing alongside stars like Justin Bieber and Coldplay and raising millions in donations for victims and their families. The show culminated in a performance of My Everything single “One Last Time” and a powerful, stripped-back performance of “Somewhere Over the Rainbow.” Grande was subsequently named Manchester’s first honorary citizen.

Grande began work on Sweetener back in 2016

Following One Love Manchester, Grande took a hiatus from the spotlight; recent interviews with Time and the Fader were her first in months. Although she told Fader that sessions for the album began in 2016, it’s clear the finished product was influenced by the tragedy. “In all honesty, I feel like [after Manchester] was when different people from the record company actually started to understand what we were trying to do,” co-producer Pharrell said. “It’s unfortunate that that situation is what gave it context, but they were able to really see [what we were going for] then.” Grande’s post-Manchester music, including closer “Get Well Soon,” is set to strike a balance between emotion and her usual pop style. As she put it: “I’ve always just been like a shiny, singing, 5-6-7-8, sexy-dance…sexy thing. But now it’s like, ‘OK … issa bop—but issa message. Issa bop but also has chunks of my soul in it.'”

“No Tears Left to Cry” was produced by “Into You” collaborator and pop music deity Max Martin, who reportedly helms about half the album. Though “No Tears” had every reason to be a downtrodden ballad, Grande told Time she deliberately avoided gloominess: “I don’t want to give [the attack] that much power,” she said. “Something so negative. It’s the absolute worst of humanity.””No Tears Left to Cry” peaked at #3 on the Hot 100 and currently sits at #9 after two months, likely giving it staying power through the summer. The song also received a surreal and visually striking music video, directed by Dave Meyers (Kendrick Lamar, Maroon 5, Katy Perry). 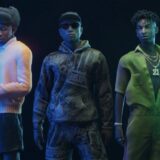 Pharrell Teams With Tyler, the Creator and 21 Savage on ‘Cash In Cash Out’

“God Is A Woman” is the (official) second single

Next up is Max Martin cut “God Is A Woman,” released on July 13. Grande teased the lyrics in a series of tweets: