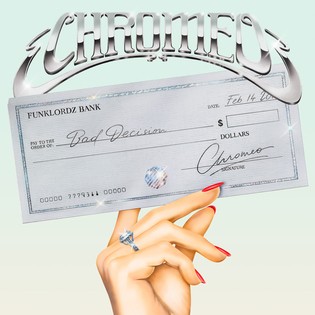 Ahead of their new album Head Over Heels, Chromeo have a new single that’s right on theme: “Bad Decision,” about a helplessly smitten dude who’s parked at his girlfriend’s door, begging to take her shopping, and already planning a tattoo he’s going to regret. “Maybe I could charter a jet,” Dave 1 (a.k.a. David Macklovitch) sings. “I don’t give a shit if I never get out of debt.”

Chromeo just finished the final version of Head Over Heels last week, the duo told Zane Lowe during a Beats 1 interview today; “Bad Decision” was one of the last tracks to be completed. The full album is out June 15 and includes contributions from Stefflon Don, Amber Mark, and French Montana, among others. We’ve already heard advance singles “Juice,” “Bedroom Calling” (featuring The-Dream), and “Must’ve Been” (featuring DRAM). Chromeo, DRAM, and guitarist Jesse Johnson (formerly of the Time) will appear on The Tonight Show this evening to perform “Must’ve Been.”

“This album is our love letter to all the different kinds of funk music that influenced us,” Dave 1 said on Beats 1 today, describing “Bad Decision” as “almost like kind of a Talking Heads kind of slow ’80s funk bop.” He namechecked Funkadelic and Red Hot Chili Peppers as album influences, too. Listen to “Bad Decision” below.