Billy Corgan went on Lars Ulrich‘s Beats 1 radio show, It’s Electric, to talk reuniting with Smashing Pumpkins‘ bandmates James Iha and Jimmy Chamberlin and working with producer Rick Rubin. Of course, he also shared some thoughts on former Pumpkins bassist D’Arcy Wretzky. Regarding Wretzky, Corgan says, “She saw music as more of a lifestyle thing—I play when I want to play, I show up when I have to, where I ate, slept, died music 24 hours a day, took drugs to listen to music … because I wanted to learn more.” Corgan goes on, “We’d come off a tour, and you could tell she hadn’t picked up a bass in two weeks. It was just different lanes of commitment in my mind, but I’m more appreciative as time has gone by that everybody approaches music completely differently.”

Corgan also talked about the process of writing music with Iha and Chamberlin, who both have writing credits on the new Pumpkins’ EPs, but the most interesting tidbits from the interview came when Corgan and Ulrich talked about Corgan’s talk on 90s alternative and the coverage at the time.

Corgan shared his feelings about the scene and dealing with the perceptions people had about the band during their rise.

“When we first would go to New York or Los Angeles or London, we would get treated a certain way and it was really confusing to us, because we grew up very working class… so hard work—that was just what you did,” Corgan stated. “So we would go to a place like New York and it’s like. ‘You guys are too into this’… we’d get castigated for working too hard.” 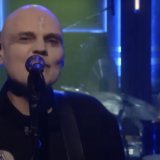 Corgan also tied this to Metallica, who he felt got the same sort of criticisms. “Metallica had that too, like an ambition that was almost like.. some people would kinda scoff at… you guys care too much.” Corgan related this attitude to hipster sensibilities as well as issues of class. “Every genre has its hipsters. For years even, I would take shit about being a fan of metal, you know, ‘It should be beneath you.’ Ultimately it gets into like weird class politics and most of the people who criticize people like us, for being who we are and what we are or what we represent, had better backgrounds than we have.” Corgan expressed a great deal of conflict with the “hipster class” of people who dictate the respect and coverage received by he and the Pumpkins, as well as the genre of metal in general.

This lead to Corgan discussing how and why these “working class” bands resonate with such large audiences by sharing an anecdote about an experience he had watching Metallica live. “I saw you guys roughly, maybe the first week or the month Ride The Lightening came out. The energy in the Aragon Ballroom that night was like nothing I’d seen before since. As a kid, 17 years old… you guys come out, James is wearing the cutoff jean jacket—you guys look like the guys I fuckin’ went to school with. These guys understand the world that I’m in, which is nowhere fuckin’ land,” Corgan passionately describes. “It wasn’t just: ‘Oh here’s Metallica the hot new band,’ these guys fuckin understand, thank god somebody gets it.” Corgan was his most animated when gushing about Metallica, as well as Black Sabbath, and what he felt was the respect due to them.

Corgan and Ulrich’s conversation about working hard and their appreciation of the other’s musical acumen, eventually circles back on that mid ’90s rock scene and what Corgan labels as the “hypocrisy” of the coverage of bands. “If everybody is sort of branded with the same brush, ok we can live with that. But you know, you’d see some people would be exalted and their sins were forgivable,” Corgan states. “It really reminded me of high school, which I didn’t like. So now I’m in the bigger high school and now we’re playing with millions of dollars and millions of people and it’s just like a popularity contest. And it brought out maybe the worst or the best in my personality, which was like, ‘I’m gonna take this on and I’m gonna use myself as the battering ram so I’m gonna make it about me, knowing it’s not about me.'” Corgan is sincere in his feelings about the Gen X-era attitude towards success and makes a few points, even if Corgan isn’t completely self aware of how off-putting he could be throughout his own career.

The full interview is worth listening to for Corgan’s take on the Smashing Pumpkins legacy and perception. Watch video from the interview below.