A$AP Rocky has a new album coming out soon, and so he would like you to know that he is a serious artist. Over the weekend, Rocky created a performance art piece in New York City to promote the forthcoming Testing. During it, he encased himself in a large “quarantined” box while he did things like plunge himself into ice water, answer softball questions from attendees, and hang out with other members of A$AP Mob. It was a 90-minute masturbatory indulgence of Rocky’s own self-seriousness, a trend that continued today in a new profile on Complex. Writer Karizza Sanchez sits down with Rocky for a mostly genial interview about his new album, his entrepreneurial moves and his legacy so far, with the only real takeaway from it being that A$AP Rocky seems kind of like a dick.

“Earlier in our conversation, the 29-year-old Harlem rapper was avoiding my questions, telling me to never ask a few again,” Sanchez writes, “At one point, when I asked what happened to the luxury fur line he once said he’d been developing, he asked if I was ‘working with the feds.’ ‘Why are you trying to get me in trouble so much, bro?’ he said. ‘Do you have actually have a vendetta against me? Why are you asking me about fur in 2018 knowing them PETA motherfuckers are gonna come looking for me, knowing I been killing my Instagram with furs the past couple months?'”

It is a very obvious overreaction to a mostly inconsequential question. Unless he was skinning the animals himself, it’s hard to imagine PETA, or the world, caring enough that it would tarnish Rocky’s influencer brand. That part of the interview comes after Sanchez starts off the piece with Rocky, playing as interviewer, asking Sanchez personal questions about whether she’s ever cheated on her boyfriend and whether she has or wants to have kids. For her part, Sanchez described it as “playful and jovial,” but it comes across invasive and creepy to the reader.

Much of this interview though follows a pretty noticeable trend of Rocky taking himself way too seriously with no sense of self-awareness. This doesn’t exactly make him unique among musicians, but it does make for a profile that is both hilarious and off-putting in its smugness. The rest of A$AP is predictably all too eager to indulge Rocky and, obviously, themselves. A$AP Ant is quoted in the piece as saying, “It’s like the second coming of Jesus, but we never went nowhere though. We was chillin’ getting money.” A$AP Twelvyy chimes in, “It’s like playing with the Lakers when they was just winning.” 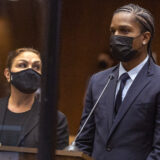 One of the funnier portions of the interview comes when Sanchez raises the subject of AWGE, Rocky’s hush-hush creative collective that does… something. What exactly that something is remains a bit foggy, but absolutely do not ask Rocky about it. Sanchez writes, “when I ask if AWGE is a label, and if [Playboi] Carti and Smooky [Margiela] are signees, he leans back in his chair, and moves his interlocked fingers up and down to the rhythm of his voice, as if to emphasize his point. ‘Don’t ask me that question again on camera.'” Sanchez continues:

It’s unclear why AWGE needs to stay a secret, since Rocky reps the presumed acronym constantly. Right now, he’s wearing a diamond encrusted AWGE ring on the ring finger of his left hand, a green/white trucker hat with “AWGE” printed across the front, and a black track jacket with yellow piping on the sleeves from AWGE’s collaboration with Japanese brand Needles. AWGE was first introduced to the world in 2015, but there still isn’t much that’s known about the mysterious agency. Rocky has said that the concept of starting a creative collective was partly inspired by Vice. “The way they had the infrastructure of Vice: the employees, the freelancers, the art, the edge—and the many moving components: film, music, magazines, etc.—it was an inspiration,” he said during an interview with the Rap Radar podcast. “I wanted to follow that format, that blueprint. I was never exposed to something like that. That’s what AWGE is.”

On the surface, Rocky sounds like every other rich person trying to create a nebulous agency at a time when the noun “creative” abounds, but why the secrecy? Everyone involved with AWGE is extremely secretive and vague about what it is as if they’re creating some new kind of illuminati when it just sounds like every other hub of dudes who identify as “creatives.” At one point, Rocky calls it “a ghetto Google,” which has venture capitalist pitch meeting written all over it. Creating any sense of mystery about AWGE feels like an attempt to use secrecy as a form of brand building, trying to stoke people’s wonder based on scant information. Basically it’s Gabbo. It should be stated that one notable member of AWGE, Ian Connor, has been accused of rape and sexual assault on multiple occasions but is not brought up in the actual interview.

Getting back to Rocky’s music and how he sees himself, he tells Sanchez, “I feel like I’m one of the best contemporary artists out right now,” he says. “My music is ahead of its time. The masses usually catch on two, three, four, five years later.” This is one of the best go-to arguments whenever you make something panned either by critics or by audiences, though Rocky has been mildly popular among both. Rocky seems to be constantly in love with his own supposed genius and risk-taking. “I’ve discovered sounds that I’ve never heard before, so I’m trying to manifest all of that into my new stuff,” Rocky says in the profile. “Do you ever hear people when they describe that LSD experience and they tell you about colors that they never seen before? That’s what I’m trying to describe. It’s like the manifestation of drugs…”

Meanwhile, Rocky’s music, by and large, could best be described as derivative. He takes all the sounds he’s fallen in love with—be it Houston rap, New York boom bap, psychedelic rock or electronic music—and making inferior versions of them, though to give him some credit, it has so far worked for him. He’s a successful artist that has certainly spawned imitators who copy him copying other people. It’s not that his ego is unearned as much as it’s just makes your eyes roll back into your head when you read someone applaud themselves for making music that isn’t very original. From the profile:

The recording session with Skepta, Rocky says, was “regular” (“Most of the time, we be chillin’ so it’s always like we got music”). But for one memorable session, Rocky invited a college professor who studies psychedelic neuroscience and psychedelic-assisted therapy to a recording session with Skepta. “He came over to monitor us and record us while we were recording [music] under the influence,” says Rocky. “It turned into this weird testing, experimental situation. It was like, man, we keep talking about psychedelic drugs and I’m doing research on Einstein and Steve Jobs and how they say if a person can endure LSD it kinda qualifies them as a genius. I was like, ‘Oh shit!’ I needed more insight so I called a professional in to do it.”

Indeed, calling in a professional sounds like a great idea.