Hayley Kiyoko’s Expectations Doesn’t Live Up to the Anticipation

Hayley Kiyoko released her first solo music five years ago, but there’s a decent chance you’ve only heard of her recently. A former child model and actor, Kiyoko (full name Hayley Kiyoko Alcroft) is an already experienced entertainer from a performing family: her father is a comedian and voice actor and her mother is a figure skating choreographer. She began her music career as one-fifth of defunct girl group the Stunners, best known as the first venue for a young Tinashe. Nearly 10 years later, the two women have long-awaited albums arriving within days of one another, a fluke of the aspirant pop star’s hurry-up-and-wait pace of activity.

But while delays and project overhauls have made Tinashe something of a cautionary tale about talent perpetually in search of a mass audience, Kiyoko has spent the past few years building a smaller one organically. A niche act with mainstream aspirations, she commands a passionate and dedicated following gathered almost entirely on the internet, where her sherbet-hued aesthetic and catalog-beautiful self-directed music videos rack up endless Tumblr reblogs. In 2015, she hit on a personal and professional breakthrough with the single “Girls Like Girls,” a release that spotlighted her as an openly gay musician. There’s not a ton of music, let alone music videos, both by and about queer women within mainstream pop, and Kiyoko has been so heralded as a savior that her fan-bestowed nickname is “Lesbian Jesus.”

It’s frustrating, then, that Kiyoko’s full-length debut Expectations is an insistent but uneven album that points toward greater musical ambitions than it achieves. The sound is pleasantly aquatic and soft-edged but fussy and overwrought, as though its architects were worried that too much downtime might spur listeners to click away. There’s something distinctly 2013 sounding about the EDM-infused, hip-hop-inspired monogenre synth pop of songs like “Feelings” and “He’ll Never Love You (HNLY),” mass-market cousins of then-current releases from acts like Chairlift and Poliça. (Kiyoko’s two main production collaborators, Jonathan “Jono” Dorr and Cecil Bernardy, are best-known for their work with the relentlessly stylized major-label “alt” band the Neighbourhood.) Some backward-looking was inevitable, though, considering Expectations has been rolling out for more than a year now; “Sleepover” was first released in March 2017, another indignity of the glacial pace of emerging stardom.

Expectations at its best is “Curious,” a rubbery dance-pop concoction with a title that suggests dilettantism and Britney Spears perfume but a lyric that flips the narrative to set up a classic Hayley Kiyoko situation: “You say you wanted me, but you’re sleeping with him.” The album is filled with early-stage romantic dilemmas, like unreciprocated crushes, potential love interests who aren’t yet out to their parents, or young queer women who seem content to date mediocre dudes instead. Youthful subject matter is key to establishing Kiyoko’s relatable persona—notice how “He’ll Never Love You” comes with hashtag-ready acronym preattached—but even some fans younger than her own 27 years may long for something more grown-up. Two generations of children’s TV stars turned pop royalty have engineered careers off comparatively family-friendly debuts, from Spears and Christina Aguilera to Miley Cyrus and Ariana Grande; it’s easy to imagine Kiyoko plotting a potentially trailblazing career on that proven model, or at least leaving her options open. But to date, even her more risqué tracks have a squeaky-clean veneer that feels Radio Disneyfied beside something like Janelle Monáe’s latest sultry, sexually fluid funk. 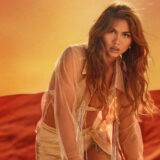 Expectations improves if you think of its approach as being more akin to Tove Lo’s boldly personal and hooky dance-pop, cool on the surface and hot beneath, with a quasi-ASMR vocal quality in the stoned bridge section of “Sleepover” or the the tension-building double-time tongue twister of “Curious.” The album’s most interesting songs are a pair of two-parters at its center: “Mercy/Gatekeeper,” a spiritually tinged account of recovery from a severe concussion with a real sense of mystery, and “Under the Blue/Take Me In,” a Lorde-like hot-weather stream of consciousness and the only song to evoke the vivid chromatic color of Kiyoko’s visual art. Both are kind of messy too—“Mercy” comes undone in the spoken-word section, and “Under the Blue” loses momentum by the second half—but arranged back to back and sandwiched by the album’s outright best songs, they feel like the keystone and the place where Kiyoko’s vision is strongest. Pray to Lesbian Jesus, because it’s not too late to save this.