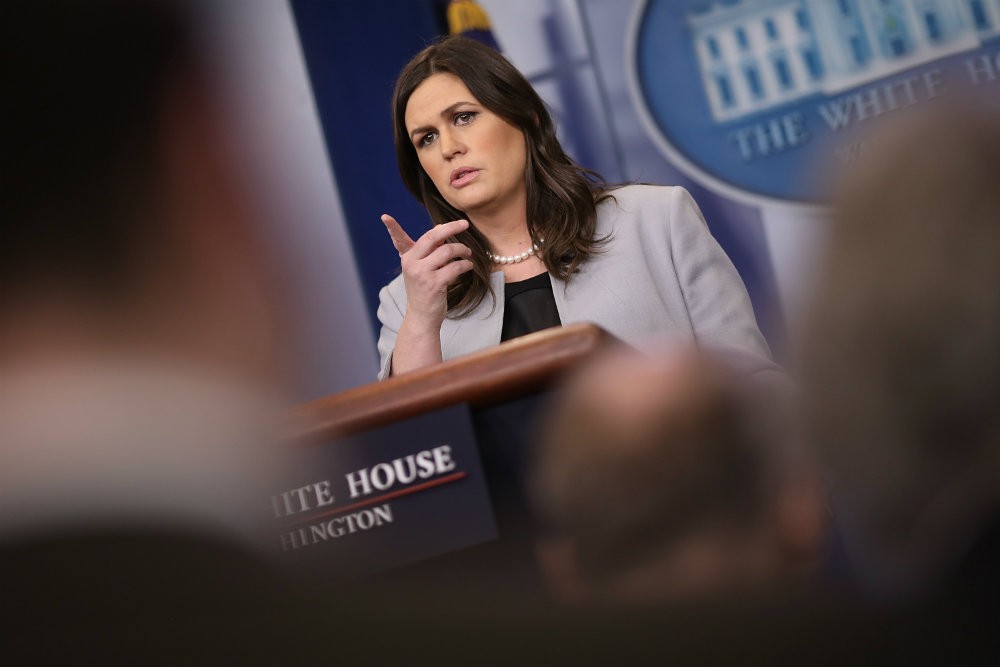 Up until yesterday, the White House was sticking by the story that Donald Trump denies having an affair with porn star Stormy Daniels and that his fixer Michael Cohen paid off  Daniels out of his own pocket without the president’s knowledge or involvement. Press secretary Sarah Huckabee Sanders accidentally shot a hole in that story at Wednesday’s briefing when she told the press corps an arbitration mentioned in the lawsuit Daniels filed against Trump this week was won “in the president’s favor.” It was the first time that the White House confirmed that the president was indeed involved in the “hush agreement” with Daniels and Trump is said to be pissed off at the admission.

When asked yesterday  about whether the president approved the $130,000 payment to Daniels in exchange for her silence, Sanders made the admission.

“Look, the President has addressed these [questions] directly and made very well clear that none of these allegations are true,” Sanders told reporters. “This case has already been won in arbitration. And anything beyond that, I would refer you to the president’s outside counsel.”

Earlier this week, Daniels filed a claim against the president stating that the confidentiality agreement between them was invalid because he never actually signed it. Part of the complaint mentions “a bogus arbitration process.”

What does Sarah Huckabee Sanders mean that @realDonaldTrump won at arbitration? Paragraph 29 of Stormy’s complaint does reference “a bogus arbitration process”. Clearly there is more to be told here. pic.twitter.com/w0RXERQU2C

“For the White House spokesperson to stand up and claim that Trump won the case in arbitration is ludicrous,” Avenatti told CBS News. “I’m dumbfounded.”

According to the White House’s website, there are no on camera briefings scheduled for today.