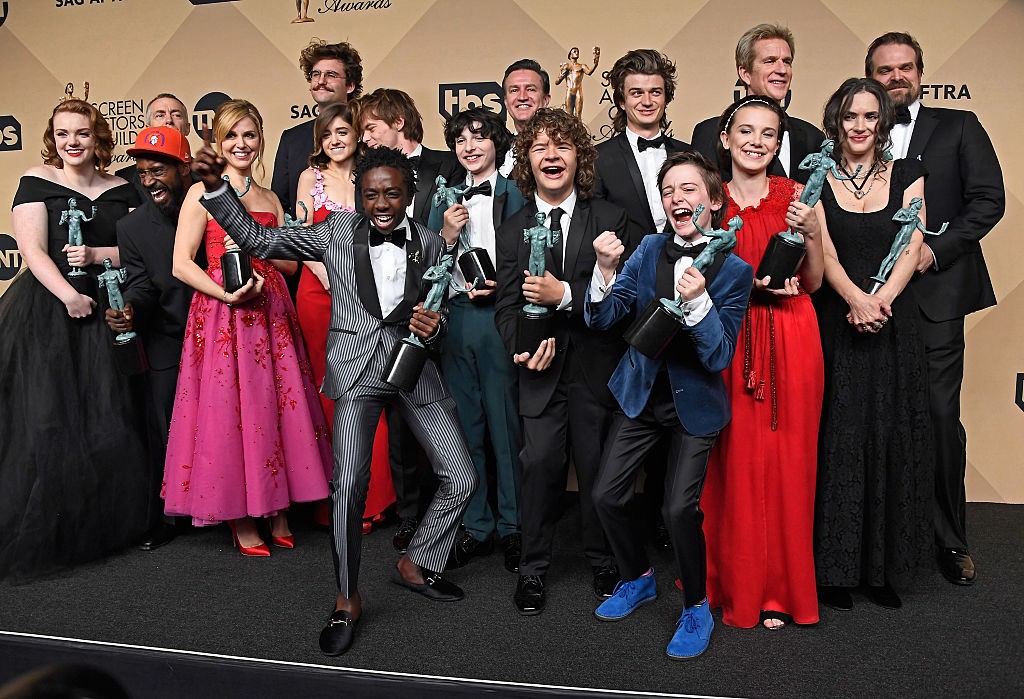 The stars of Stranger Things are cashing in on the Netflix drama’s wild success.

The cast of the Emmy-nominated show have scored major pay raises following an intense renegotiation ahead of the sci-fi drama’s third season. Sources say the new deals for the kids actors are worth roughly 12 times their previous salaries, and that the streaming giant is ponying up as much as $350,000 an episode for each of the show’s adult actors. Insiders say the deals closed last week as production on season three is scheduled to begin April 23. Netflix declined comment.

According to sources, the main actors are divided into different pay tiers. Winona Ryder (Joyce) and David Harbour (Jim Hopper) make up the “A tier” and are making up to $350,000 an episode. The “B tier” consists of the young stars — Finn Wolfhard (Mike), Gaten Matarazzo (Dustin), Caleb McLaughlin (Lucas) and Noah Schnapp (Will) — who are each collecting $250,000 per episode. Meanwhile, the actors in the “C tier” — onscreen teenagers Natalia Dyer (Nancy), Charlie Heaton (Jonathan) and Joe Keery (Steve) — are each pocketing roughly $150,000 an episode.

What remains a mystery is where the show’s 14-year-old breakout, Millie Bobby Brown (Eleven), landed among those tiers, as her camp has been tight-lipped throughout the dealmaking process. What is known, however, is that Brown, as THR reported last year, separated herself from the rest of the cast during the renegotiation, and is at least making the $250,000 that the other younger actors are earning. But some sources suggest Brown may be getting even more, possibly the $350,000 per episode that Ryder and Harbour are making. Others balk at the idea of Brown earning as much Ryder, an Oscar-nominated actress who has been working for three decades, and say the young starlet is instead in her own tier of $300,000 in between the adults and the other kids.

Regardless of Brown’s exact payday, the hefty salary bumps represent massive raises for television stars. Even though the actors were handed out bonuses of about $60,000 once it became clear that the show was a phenomenon, a renegotiation was still all but a given heading into the drama’s third season. Sources say the child actors were making in the low $20,000 range for the first and second seasons of the series, while Ryder’s per episode rate was pegged at around $100,000 and Harbour’s at $80,000. The raises mean that the young castmembers are earning a whopping 1,200 percent more than what they were previously making on the show.

The raises also reflect the success the nostalgic 80’s-set series has had ever since it burst onto the scene in the summer of 2016 as a surprise hit. While Netflix, like its streaming competitors, doesn’t report viewership numbers, most outlets that track the streamer’s ratings report Stranger Things as one of the most watched on the service. The drama, created by brothers Matt and Ross Duffer, was nominated for 18 Emmys last year, including acting nods for both Brown and Harbour. And the popularity of the show has prompted Netflix to strike licensing deals with clothing companies like Hybrid Apparel and Hot Topic, even leading the company to hire an executive (Jess Richardson) to oversee those efforts. As Netflix has run into serious issues on its former flagship series House of Cards in the wake of Kevin Spacey’s sexual misconduct scandal, Stranger Things has quickly become the platform’s crown jewel.

Just as the drama has helped to solidify Netflix’s reputation as a premiere destination for creators, the show has also launched many of its previously unknown cast members into full-fledged stardom. Brown, for her part, has parlayed her fame on the series into a burgeoning fashion career (she’s the new face of Calvin Klein, has an deal to promote Converse sneakers and was seen front row at the Monclear show at Milan Fashion Week in February), a massive social media following (she has over 15 million Instagram followers alone) and prestigious bigscreen opportunities: She’ll star opposite Kyle Chandler, Sally Hawkins and Bradley Whitford in 2019’s Godzilla: King of the Monsters, and also has a development deal at Legendary for an Enola Holmes adaptation (the teen is attached to produce it, too).

To be sure, the show has been a calling card for its other castmembers, as well. Wolfhard had a plum part in the box-office smash It, and also snagged a coveted role in the upcoming film The Goldfinch with Nicole Kidman. Dyer was recently cast in Dan Gilroy’s next feature, which stars John Malkovich and Jake Gyllenhaal, while Keery will appear in the movie Beef with Timothy Olyphant and Jai Courtney. Harbour, who already had an extensive résumé before Stranger Things, saw his star rise considerably after the show’s debut, landing the lead role in the Hellboy reboot. And for Ryder, the drama is widely considered her comeback vehicle.

Renegotiations are, of course, common on successful shows. Higher-profile examples often spill into public view, dating back to the Friends cast landing their $1 million per episode paycheck. More recently, the raises awarded the casts of ABC’s Modern Family and CBS’ Big Bang Theory made headlines, as did that of HBO’s Game of Thrones, which has undergone multiple deal iterations since the drama’s premiere in 2011 (the most recent one had the six leads earning upward of $500,000 per episode). The cable network also recently inked new deals with the stars of Big Little Lies when it decided to bring the limited series back for a second season. Reese Witherspoon and Kidman were said to have jumped from roughly $300,000 an episode in season one to around $1 million for the new season, using Witherspoon’s Apple payday as a negotiating tool. The renegotiations led an HBO exec to say that the cast’s salary demands “raped” the network, only to later apologize for “the poor choice of words.”

Borys Kit contributed to this report.