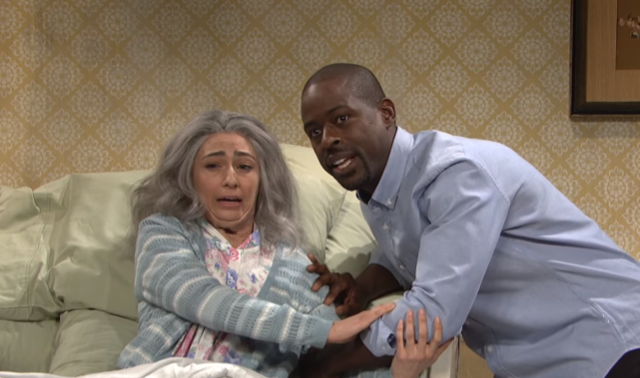 Nickelback have basically become a walking punchline, but they still have their defenders. The Smashing Pumpkins’ Billy Corgan, for one, has called Chad Kroeger an “incredible songwriter,” and hits like “This Is How You Remind Me” and “Photograph” may or may not actually be really good songs. Another prominent defender? Saturday Night Live, which featured a sketch last night acknowledging the awesome, almost elemental power of butt-rock.

Melissa Villaseñor starred as an aging Nickelback fan on her deathbed whose powerful last words to This Is Us’ Sterling K. Brown, no stranger to moving family drama, consist entirely of the lyrics to Nickelback’s “This Is How You Remind Me.” Brown’s unwavering commitment to the ridiculousness of the bit really sells it, eventually bringing in family members Cecily Strong and Pete Davidson and even paramedics Luke Null and Alex Moffat. Watch the sketch (and probably get “This Is How You Remind Me” stuck in your head for a bit) below.