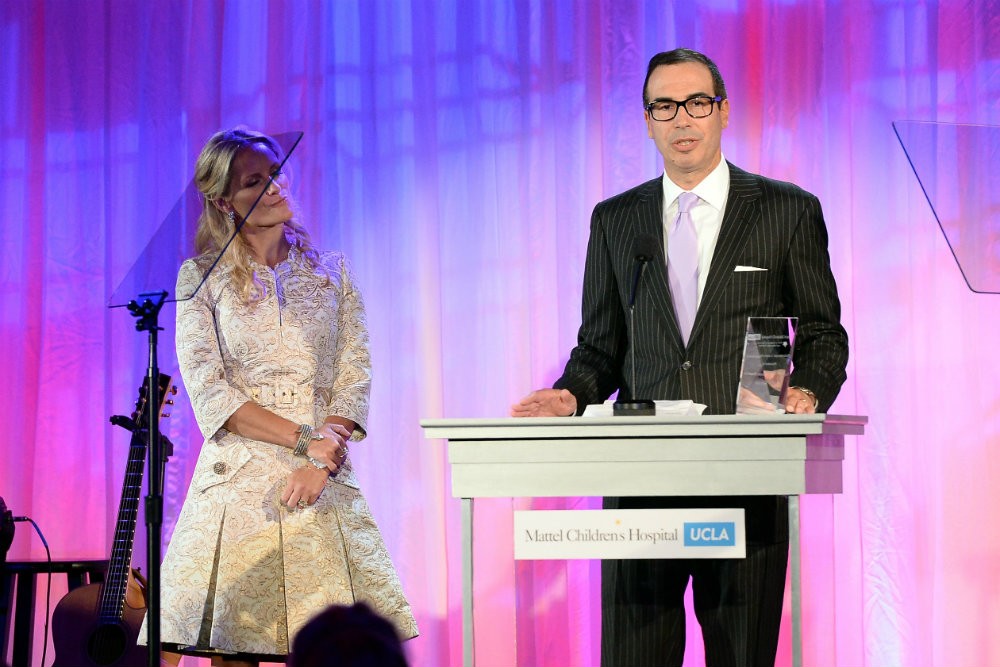 Treasury secretary and Suicide Squad executive producer Steven Mnuchin would rather UCLA not post video of a an appearance he made at the university’s Burkle Center for International Relations on Monday, the Wall Street Journal reports.  The talk with Marketplace host Kai Ryssdal  didn’t go as Mnuchin hoped as he was besieged by protestors, a booing crowd, and a host who insisted on asking him tough questions about the Trump administration’s tax reform policies and stance on sanctions. As such, Mnuchin would rather you not see the videos of him getting owned by the student body.

“I normally go [speak to] people who wanna listen to me speak,” Mnuchin said, addressing protesters at the beginning of his speech. He later said that the hecklers would eventually tire themselves out before joking, “Oh yeah, I’m dealing with students, I forgot.”

Mnuchin became more annoyed as the event wore on and reportedly stopped the talk several times to confront protesters. Now the treasury secretary would rather you not see video of him getting confronted despite the fact that the school was planning to upload video of the talk onto its website this week. From WSJ:

UCLA spokeswoman Peggy McInerny wrote in an email on Tuesday that Mr. Mnuchin “has retracted his permission for the Burkle Center to post its video and podcast of yesterday’s event on its website, so we are unable to share either recording with you.”

A spokeswoman for Mr. Mnuchin didn’t dispute that he requested the university not post the video of the event.

Mr. Mnuchin “welcomed the chance to speak and discuss important economic issues,” the spokeswoman said. “The event was open to the media and a transcript was published. He believes healthy debate is critical to ensuring the right policies that do the most good are advanced.”

The ban doesn’t apply to people in the audience who recorded the event on their cellphone, but we imagine Mnuchin would prefer you not view the following videos of him getting booed and heckled.

Here’s video of Steven Mnuchin getting heckled. He begged UCLA to not release any video. I guess he didn’t see the other cameras in the room. #FireMnuchin pic.twitter.com/sr2oJ3nsEg

Here’s the extended clip of the brave young women with @revclub_la & @RefuseFascismLA who righteously disrupted Mnuchin at UCLA and called him out for what he is. Join them and many others across the country on March 1st for 11 mins of silence for the 11 million immigrants. pic.twitter.com/3TiZtZZ14I